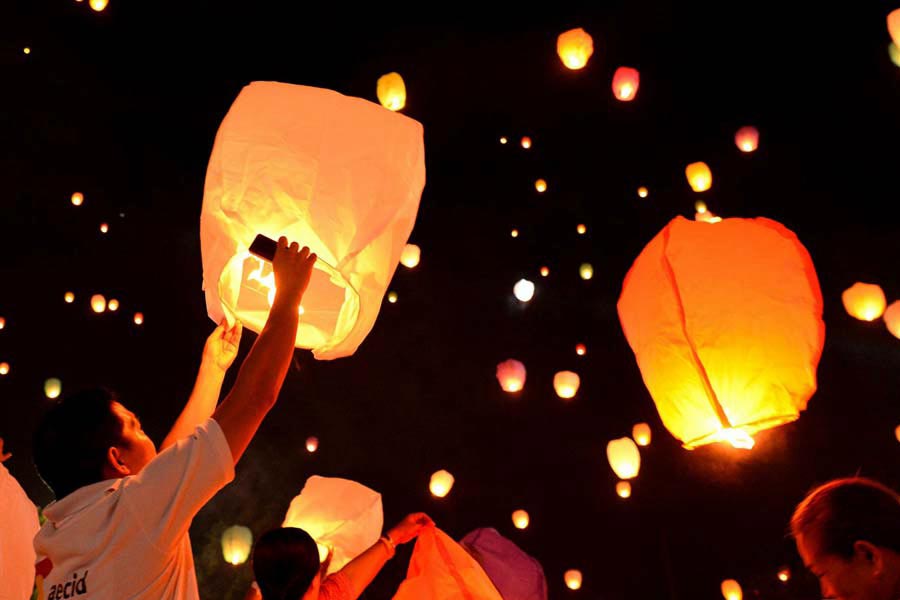 Chinese sky lanterns are also known as flying wish lanterns, memorial flying lanterns, are one of the existing intangible cultural heritages with a long history. People have mastered the thermal principle of letting off lanterns in ancient times, and they were mostly used to convey military information and send signals during wars. Through long historical changes, Chinese sky lanterns have gradually transformed from military use to an entertainment tool for people. Nowadays, people mainly release sky lanterns to pray for good luck, make good wishes, and symbolize a successful harvest and happiness every year.

1.Where did sky lanterns originated

The Chinese sky lantern is also called the Kongming lantern, is said to have been invented by Zhuge Kongming, a famous statesman and military strategist during the Three Kingdoms period. Back then, Zhuge Kongming was besieged by the enemy in the city and could not send his troops out for help. KongMing calculated the direction of the wind and made a floating paper lantern, tied with a message for help, then indeed out of danger, so later generations called the lanterns for Kongming lanterns. Another theory is that the lanterns were shaped like the hats worn by Zhuge Kongming, hence the name.

In fact, according to archaeological findings, items similar to paper sky lanterns had already appeared as early as the Western Han Dynasty, people already use the principle of hot air to raise some expanding materials into the sky to transmit military information or to detect wind direction. If people at that time saw the lanterns in the night sky, it meant that war had taken place. Therefore, sky lanterns were an unlucky sign in the minds of the common people at that time. In addition, sky lanterns had another use in ancient China – to save the souls of the dead. According to legend, Zhuge Kongming used sky lanterns to save the souls of dead soldiers after battles. Later, some ethnic minorities in China also imitated Zhuge Kongming and used sky lanterns as a tool to comfort the souls of the dead.

Later, with the gradual peace and stability of the society, the use of Kongming lanterns was gradually changed from war to folk prayer. From the Tang and Song dynasties, people letting off lanterns to pray for good fortune during the Spring festival, or any other important traditional Chinese festivals. Men and women, old and young personally write the wishes of blessing on the lanterns and letting lanterns into the sky, symbolizing the success of harvest and happiness year after year. So people also call the Kongming lantern blessing lanterns or peace lanterns. In the long history of ancient China, due to the development and popularization of paper-making technology, the production of Chinese sky lanterns has become more convenient, and their uses and the cultural connotations they carry have also changed dramatically, and they have a very high status in people’s hearts.

The working principle of the sky lantern is the same as that of the hot air balloon, both using the buoyancy of hot air to lift a ball into the air. The flying sky lanterns appear to be large in size, but they are actually very light. Lightweight, as well as a huge shape, provides a very favorable condition for the lantern to release into the sky. Even in the absence of a flame, as long as the lantern is placed in the wind, it is easy to let it fly and float around with the wind.

Inside the lantern, there is a flame that keeps burning, making the air around the lantern heated. The hot air will rise and the cold air will sink, generating a certain buoyancy for the whole lantern and allowing it to float smoothly. When the internal flame fuel is gradually exhausted and the buoyancy is not enough to support gravity, the flying fire lantern will slowly fall down and fall back to the ground.

3.How to launch a sky lantern

If you want to release lanterns to let off in the sky, please take care to check the following before lighting:

How to release into the sky? It is easier with two people – one to hold a lantern and one to light the fuel.

4.How to buy sky lantern

There are many factors to be considered:

Pepchina provides original handcrafted Chinese sky lanterns, which are biodegradable and has passed CE Certification and MSDS Certification. To check out the full range of products, head over to our store.

5.When is the sky lantern festival

At present, there are activities to display Chinese Sky lanterns all over the country, but the local folk customs and traditions have formed mainly in Pingle, Sichuan, Wenchang, Wanning, and Danzhou in Hainan, Hakka or Dai people on the Liangjiang River in Laibin, northern Taiwan. Pingxi area and so on. Sichuan Pingle Chinese Sky Lantern can be traced back to the Three Kingdoms period. Pingle is the military center of the Shu Kingdom with a history of more than two thousand years. Pingle’s craftsmanship of Chinese Sky lanterns has been successfully declared as Chengdu’s intangible cultural heritage. Pingle’s custom of setting off Chinese Sky lanterns can be pushed to the end of the Qing Dynasty. It was originally to commemorate Zhuge Kongming, but now it has gradually evolved into a festive ceremony. Every Spring Festival, Qingming Festival, Dragon Boat Festival, wedding celebrations, etc., the common people will also set off Chinese Sky lanterns to pray safe and happy. When people set off Chinese Sky lanterns to express their wishes during the Spring Festival, they write “Harmony and Beauty, Reunion” on the main part of the lantern, and write “Blessings for the newlyweds and forever together” when expressing their blessings. Hainan Chinese Sky Lanterns are found in villages around Wenchang, Wanning, and Danzhou in Hainan. According to legend, it was spread from the mainland to Hainan. Hainan Chinese Sky Lantern, also known as “Wen Lantern” and “Sky Lantern”, is made of white paper paste. Because Wenchang’s accent “Sky Lantern” is homophonic with “Tian Ding”, the boy’s family holds various lanterns with auspicious words such as public lanterns, human lanterns, first-brand lanterns, flower basket lanterns, carp lanterns, rare ancient lanterns, etc. The “lights” team, beating gongs and drums, marched around the village to the temples in the village, expressing the meaning of sending “people are prosperous, family scenery is prosperous”. The Hakka Chinese Sky lantern in Guangxi also has a very profound meaning. On the night of the Dai Lunar New Year, the Hakka people will put a huge oval fireball into the air. This fireball is called “Gong Fei” in Dai language and translated into Chinese as “lamp” or ” “Fireball” is actually the same as the “Chinese Sky Lantern” of the Han nationality, except that it is called differently. Some “gong bandits” can run in the sky for days and nights. The Hakka people not only release Chinese Sky lanterns during festivals but also pay tribute to the souls of the dead by releasing Chinese Sky lanterns at funeral ceremonies for the death of their loved ones. In addition, the custom of “lighting sky lanterns” during the Lantern Festival in Pingxi Village and Shifen Village in northern Taiwan also has a history of more than 200 years. In Pingxi, the tradition of using sky lanterns began during the Daoguang period. In recent years, the Taipei County Government and Pingxi villagers have systematically promoted them. Tens of thousands of people flood into Pingxi during the Lantern Festival. The cultural characteristics of Xixiang.

With the development of science and technology, Chinese Sky lanterns are no longer used for military communication, but the custom that has been circulated among the people for thousands of years is lingering. Nowadays, there are activities to set off Chinese Sky lanterns in various places across the country. Especially in today’s rich material life, Chinese Sky lanterns have been given a variety of functions and uses. The shapes, textures, and types of Chinese Sky lamps are also becoming more and more diverse. From the current point of view, the common Chinese Sky lamps mainly include the following categories. First, it is used for festival blessings. This type of Chinese Sky lantern is used for festivals. Second, it is used for love wedding lanterns. The lanterns are painted with lovebirds, which symbolize couples flying with each other; or there are texts, which symbolize the love and fate of both parties, to wish the two people have a close heart and a good relationship for a hundred years. Third, it is used in commercial advertisements. Since the merchants have taken a fancy to the eye-catching features of the Chinese Sky Lantern, the producer writes his product name on the surface of the Chinese Sky Lantern and promotes it through the Chinese Sky Lantern. Therefore, in general, during the emergence and continuous development of Chinese Sky Lantern culture, the cultural connotation it represents is constantly evolving and changing. Today, when the protection of intangible cultural heritage is being promoted throughout the country, it is very commendable that some places can maintain the original customs and habits on certain days, which has played a positive role in the protection of intangible cultural heritage in various places. Chinese traditional culture should also be given proper guidance in contemporary society. If the purpose is solely for economic benefits, the use of Chinese Sky lanterns for advertising will cause misunderstanding and loss of traditional culture, which will bring irreparable losses.

Most flying paper lanterns are made from combustible materials, which then take flight by the heat from an open flame candle. If it is released at will, once it falls to gas stations, grasslands, forests, garbage dumps, and other places with a lot of combustible materials, it is very easy to cause fires. Therefore, it is advisable to release the flying lanterns in open and clear places, such as beaches, riversides, and places without trees in the countryside.

At present, although most countries do not have laws specifically prohibiting the release of sky lanterns, there are many local policies that have prohibited the release of sky lanterns, for example, sky Lanterns are prohibited throughout the State of California, which is a dry and fire-prone place. Different areas have different regulations, It is recommended to check with your local fire marshal before releasing and to strictly follow the regulations. We don’t want our good memories to turn out bad.

Offered in the country of usage