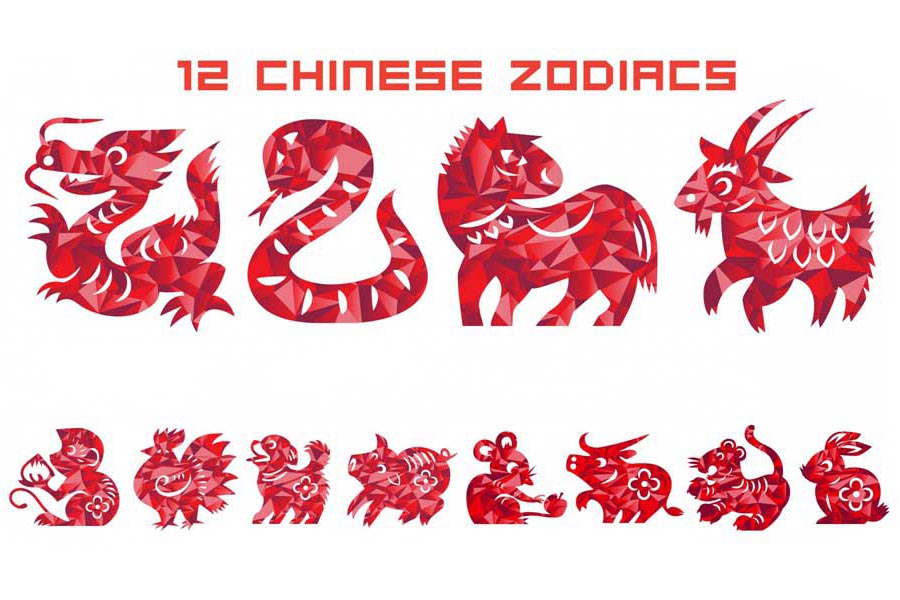 In Western astrology, the 12 constellations of the zodiac are synonymous with the orientation of the universe. When a person is born, each star falls into the position of the zodiac, indicating a person’s innate personality and talent. In China, it corresponds to the Chinese zodiac. Every Chinese is closely related to the Chinese zodiac culture from the day of birth.

2. How do the 12 Chinese zodiacs come into being?

Mostly is closely related to the Chinese heavenly stems and earthly branches. The ancient Chinese thought that the sky is the main and the land is the secondary and lists ten heavenly stems and twelve earth branches, each represented by a Chinese character. The match between the ten heavenly stems and the twelve earthly branches represents different years, for example, 2020 is the year of Gen Zi, in this way, 60 years can complete a reincarnation, and 2080 is also called Gen Zi year. Later, people became to use the twelve Chinese zodiac signs to match the twelve earthly branches, which is a way of numbering the years, for example. 2020 is the Rat year of Gen Zi. In general, Chinese folks distinguish different zodiac years according to the Spring Festival, which is the first day of the first lunar month.

4. What is the relationship between the Chinese zodiac and marriage?

The Chinese zodiac signs are paired with each other. With six reincarnations, the zodiac signs can be divided into six groups. Each of the two zodiac animals is a group. In ancient times, the matching of zodiac signs was very important for marriage in China. The maintenance of marriage is related to the two people’s hobbies, lifestyles, and three views, but many Chinese still believe that the matching of the zodiac is also a factor. The six pairs of matching zodiacs are mouse and cow, tiger and pig, rabbit and dog, dragon and chicken, horse and sheep, and snake and monkey. The opposite pairings are rat and horse, cow and sheep, tiger and monkey, rabbit and chicken, snake and pig, and dragon and dog. In China, everyone will have their zodiac signs from birth, that is the expectation of the descendants towards their descendants. The ancestors hope that their descendants should be mellow, not too radical, but also know how to cut in from their counterparts. This is a philosophy of life.

5. How to choose to have a child with good luck?

The Chinese believe that the birth date of the zodiac sign will always accompany a person’s life, so when they choose to have a child, many Chinese will also calculate the year the child was born. They believe that the luck of a person’s life is also related to the Chinese zodiac. For example, 2020 is the year of the rat. Because each zodiac year is divided according to the five-line rule, for example, rats in different years have golden rat life, wooden rat life, water rat life, fire rat life, and squirrel life, the other 11 zodiacs are the same. Respect for the Chinese zodiac is not a superstition for the Chinese in the traditional sense, but a kind of passed-down folk custom. Of course, every parent hopes that his child will have a safe life and a successful career. Therefore, this is to give the Zodiac a better meaning.

The Chinese zodiac culture is a metaphorical culture. The so-called “metaphor” is to give a specific image with a special abstract meaning, which is a unique aesthetic thought of the Chinese nation. The Chinese heavenly stems and earthly branches are originally an original creation of the Chinese people. For the twelve earthly branches, the ancestors also used twelve animals to represent them. The ancient ancestors were deeply in awe of the value of time, but they also looked forward to staying close to the deities for a blessing. So, they use the animal that they are most familiar with or even accompanied by day and night as a way of numbering the years. This is a special way of visualization. People endow the zodiac with colorful symbolic and figurative meanings. Therefore, the zodiac has a special value and role, such as astronomy, calendar, birthday, fleeting, character, destiny and blessings, celebrations, etc., different zodiac signs have different meanings and special advantages and taboos.

Everyone in China knows that their zodiac sign is the most basic thing, and most Chinese are convinced that zodiac signs can reveal the ups and downs of human fortune. Like the Western constellations, the Chinese zodiac is the wisdom of the ancients.