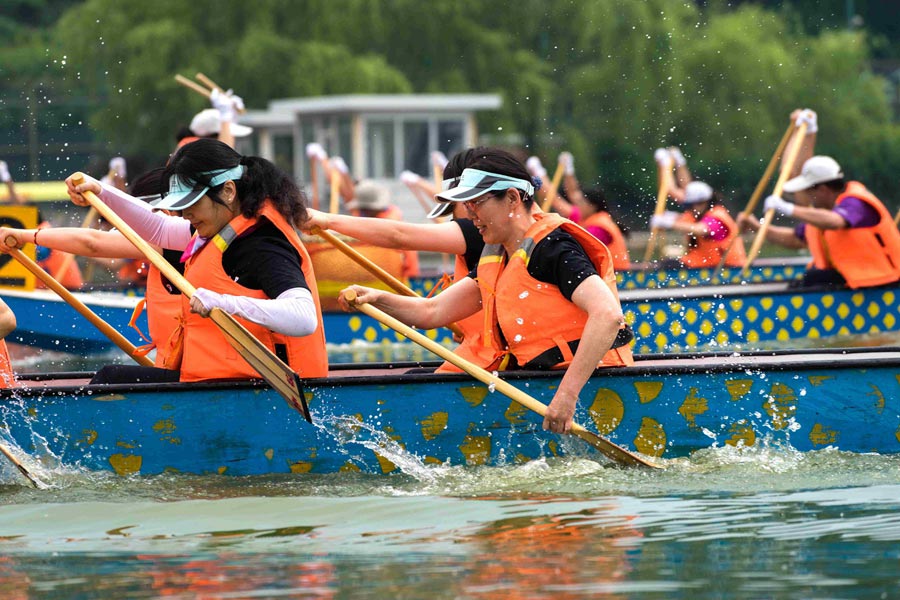 The Dragon Boat Festival is one of the most typical traditional festivals in China. It is celebrated on the fifth day of May in the lunar calendar, which aims to worship the ancient patriotic poet, Qu Yuan(340-278 BC).

China’s vast area along with numerous legends gives rise to different customs in different places, and here are 6 customs you should know about the historic traditions of the festival.

Rowing a dragon boat is a traditional custom during the Dragon Boat Festival. Legend has it that the custom originated in the ancient state of Chu, that people fell over each other to catch up with Dong Ting Lake to save the life of the valiant minister Qu Yuan. Local people believe that, by rowing dragon boats to disperse fish in the river, Qu Yuan’s body would not be eaten. After that, every year on May 5, people row dragon boats to commemorate him.

The race boat’s shape and system change with the times as well as different regions. According to reports, in ancient times, the dragon boat on West Lake measures about four or five meters long, with its head and tail high warped. However, the modern dragon boat used for racing is much simpler than the old one. The hull, the flag, and other decorations on the boat, as well as the rowers’ clothing, are all required to be the same color.

Rice dumpling, or traditional Chinese rice pudding, is one of the conventional foods eaten at the Dragon Boat Festival. The main materials of rice dumplings are glutinous rice, stuffing, and new leaves. Due to the different eating habits, rice dumplings have various flavors in different parts of China, some people favor salty ones, while others tend to eat sweet ones.

The steps for making rice dumplings are quite interesting. First of all, you have to carefully pick out and prepare suitable materials. Then, the seasoning is of vital importance to the final taste. Salted pork dumplings should be mixed with a little monosodium glutamate, sugar, wine, salt, and soy sauce, and rubbed repeatedly until the seasoning seeps into the pork. Next comes the wrapping, which is not suitable to tie the rice dumplings too tightly to prevent the rice grains from being squeezed into the bean paste. If they are not cooked thoroughly, they will be sandwiched. The final part of the process is to properly boil them. Water must be boiled before dumplings fall into the pot, and it takes about 3 hours to make them cooked thoroughly.

People regard planting wormwood and calamus as one of the important customs of the Dragon Boat Festival. Chinese mugwort is an important medicinal plant, which can also be used to treat diseases, moxa-moxibustion, and insect repellent. The wormwood contains the most oil in May, during which people compete to collect it due to its best effects. After collection, people often hang wormwood at the door of the house to drive diseases, prevent mosquitoes, and ward off evil spirits because of its special fragrance. The leaves of the Acorus calamus also contain volatile aromatic oil, which is a drug for refreshing, invigorating the body, eliminating stagnation, and killing insects.

In traditional Chinese culture, the five colors “green, red, white, black, and yellow”, which symbolize five directions and elements, are regarded as auspicious colors. It was once a very popular custom to tie five-colored silk threads to the arms on the Dragon Boat Festival. But now it developed into many beautiful ornaments, such as long-life thread, long-life lock, sachet, and so on. The production is becoming more and more exquisite and it has become a unique folk art of the Dragon Boat Festival.

It is also said that on the first rainy day after the Dragon Boat Festival, the river will wash away the plague and disease if you cut off the multicolored thread and throw it in the rain, which means that it can fight against disasters, thus bring you a year of good luck.

Comparing flowers and plants is a folk game derived from collecting herbal medicine. When you go out to the Dragon Boat Festival, you can find some strange flowers and plants to compete with each other. You would win the game if you find new varieties or if you have the most varieties. It is generally believed that the custom is related to the emergence of traditional Chinese medicine.

In the form of antithesis, the game entails participants reporting the names of the flowers and grass to each other, which makes people enjoy the fun of learning knowledge of plants and literature. In the case of children, they hook each other up with their petioles, and the one who first breaks the others leaves to win.

In southern China, it is also a custom to fly kites for Dragon Boat Festival. Kites are usually made of paper, which is a kind of toy. The procedure of flying a kite is complex and demanding. First, you should paste paper or silk on the skeleton of bamboo strips to make a beautiful kite. Then you can try to pull the long line tied on it, and put it into the sky when taking advantage of the wind. What is interesting is that a kite belongs to an aircraft that only uses air power.

Nowadays, flying kites has become a normal recreational game for people to play, especially kids. Bathing in warm sunlight in the spring is quite relaxing and pleasant. It has also evolved into a popular parent-child activity as it is quite interesting and intellectual for kids.