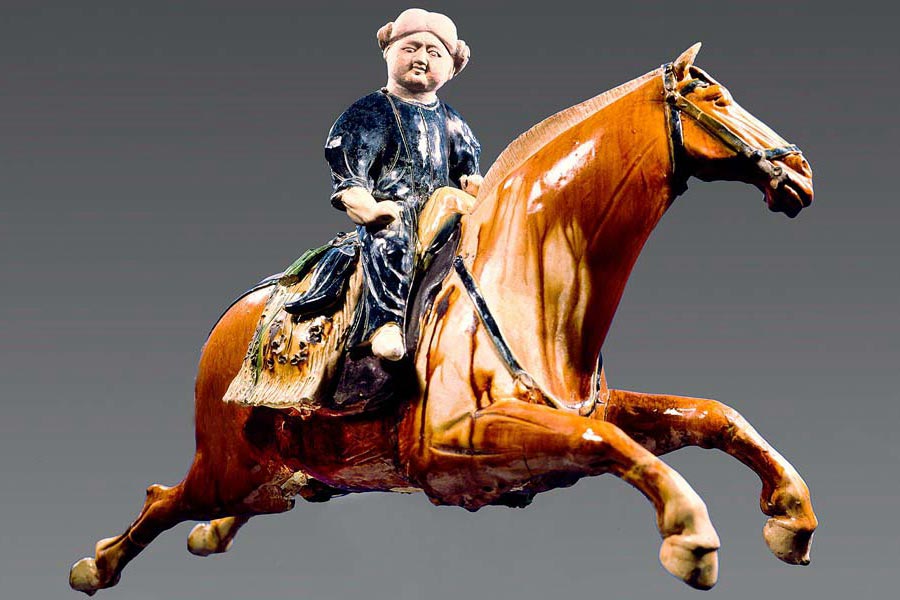 1. Are Tang Sancai potteries or porcelains?

In fact, so-called ceramic is a general term for pottery and porcelain. There are many differences between pottery and porcelain. First of all, their raw materials are different. The pottery is made of clay which has an iron content of less than 3% and on the contrary, the other is made of porcelain clay which has an iron content of more than 3%. secondly, the temperature of firing is different. The pottery can be made under 2012 degrees Fahrenheit, but the porcelain must be made at higher than 2192 degrees Fahrenheit. Hence, Tri-Color Glazed Ceramics are potteries.

2. Are there only three colors on Tang Sancai?

3. When did Tang Sancai appear?

It was no occasion that Tang Tri-Color Glazed Ceramics appeared in the Tang Dynasty. During this period, the country is stable and the economy was unprecedentedly prosperous. The culture and arts were flourishing. A powerful country could develop quickly in all fields, so the ceramic industry made great achievements. Before the Tang Dynasty, there was only a single-color glaze on the pottery. But since then, a variety of glazes have appeared. Moreover, the Tang was an open dynasty in an inclusive manner. of cultural fusion and cultural collision. In addition to it, people’s aesthetics changed generally. Therefore, Tang Tri-Color Glazed Ceramics became colorful. Besides, at that time, a large number of funeral objects were required by mortuary customs, which objectively promoted the development and evolution of Tang Tri-Color Glazed Ceramics.

4. At that time, what was the role of Tang Sancai?

China always had a buried tradition. Luxuriant burial was a special social phenomenon in China with a long history from the Slavery Society to the present times. The custom of the elaborate funeral was popular during the Tang Dynasty due to people’s belief in the existence of gods and ghosts and filial piety. Tang’s prevalence of this practice was not only a high-ranking official aristocracy, the people were so, and formed an atmosphere. At that time, luxurious burial ceremonies were carried out and noblemen even spent most of their annual income building their tombs. Because people believed that after their death, their souls would live in another world. If they made luxurious burial ceremonies, they would enjoy that world. Therefore, there were a large number of burial tombs in the tombs of some emperors and dignitaries, and they would like to enjoy their favorite things in the tomb with their souls. These kinds of things were called funerary objects.

In the Tang Dynasty, the tradition of luxuriant burial was very popular. Actually, there were official regulations on funerary items. But few people would obey these regulations. According to the survey, most people got out of line and enjoyed funerary objects which were more than the official regulations. At this point, most of the Tang Tri-Color Glazed Ceramics which we have found were funerary objects. And among these funerary objects, most of them were horses. The horse was an indispensable animal in ancient life, especially in military affairs. Therefore, the Tang people attached great importance to the horse. The tricolor horse was the most outstanding pottery in Tang Tri-Color Glazed Ceramics.

Through these historical objects unearthed in the pit, we could understand the fact that Tang Tri-Color Glazed Ceramics played a very important role in religious articles. The typical cases are the productions in Qingshan Temple, Lintong City, and Shaanxi Province. With the help of Tang Tri-Color Glazed Ceramics, we can know more about the specific situations and details of religious development.

5. What are the main types of Tang Sancai?

Among various kinds of animal statues, horses and camels were the most conspicuous. Why were there so many horses and camels in Tang Tri-Color Glazed Ceramics? Actually, the fact was related to the history of social development at that time. These statues reflected the developed transportation industry for the time. In the era of the flourishing Tang dynasty, camels were the main tool for cultural exchange and commercial trade between the Tang Dynasty and neighboring countries in the Western Regions. Therefore, in this period, camels were common.

Besides, during the era of the flourishing Tang dynasty, the emperor carried out the policy of opening to the outside world, horses played a significant role in commercial trade as an indispensable means of transportation. Moreover, horses got high value in terms of fighting on the frontier, defending the territory, going on patrol, hunting, and obeying court etiquette. Therefore, the statues of horses were extremely prosperous among Tang Tri-Color Glazed Ceramics. In addition to camels and horses, Tang Tri-Color Glazed Ceramics had also other statues, such as pigs, sheep, rabbits, chickens, ducks, and so on.

However, it was well-known that during the prosperous era of the Tang Dynasty, the king implemented a policy of opening to the outside world so that cultural exchanges and commercial trades between China and foreign countries were extremely frequent. In order to make more and more styles of Tang Tri-Color Glazed Ceramics, sometimes the craftsman would take a page from Persian and Arab countries that were adjacent to China.

6. What are the artistic characteristics of Tang Sancai?

During the Tang Dynasty, the CNP(Comprehensive National Power) grew significantly. The economy was prosperous. Society was stable. And the arts and culture were blooming with the absorption of foreign cultures. On account of its special social background, Tang Tri-Color Glazed Ceramics got a good environment for development and developed with certain conditions. From the perspective of aesthetics, they not only inherited the unique tradition of the previous generation but also absorbed other styles of neighboring countries. In a word, Tang Tri-Color Glazed Ceramics perfectly combined practicality and aesthetics so that they got both artistic charm and exotic style.

4) Popularity for a short time:

Contemporary artists know the artistic value of Tang Tri-Color Glazed Ceramics and make great efforts to restore its former grandeur, which means so much to human beings.