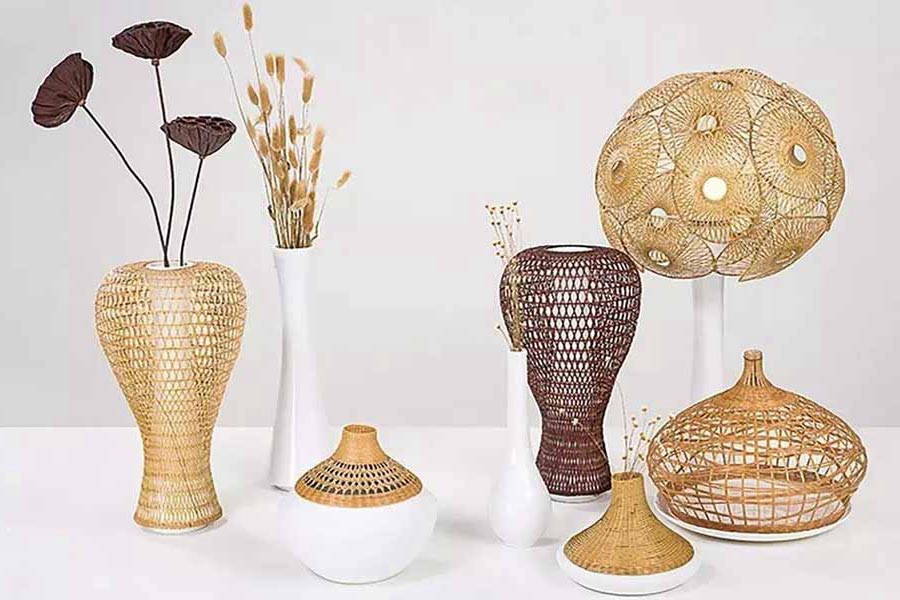 Bamboo is indispensable for cute pandas, as more than 99% of their diet is bamboo. Is bamboo just the diet of pandas? Not really, through the bamboo weaving process, bamboo can be transformed into various utensils, decorations, and even art crafts. Bamboo becomes all kinds of possibilities through the intelligence of the laboring people.

Bamboo weaving has a long history in China. According to archaeological data, humans have been engaged in simple farming and animal husbandry production after they settled and lived. When the rice millet and the hunted food have a little surplus, the ancient Chinese people would store the food and drinking water. Then, local materials were used, and various tools such as stone axes and stone knives were used to cut the branches of the plants into baskets. In practice, it was found that the bamboo is neat and crisp, strong in cracking, full of elasticity and toughness, and can be easily woven and durable. As a result, bamboo became the main material for the preparation of utensils at that time. With the improvement of people’s living standards, bamboo woven products not only exist as utensils but are also widely used in various life scenarios.

In the Yin and Shang Dynasties, the weaving patterns of bamboo and rattan were abundant. During the Spring and Autumn Period and the Warring States Period, the utilization rate of bamboo has been improved, and bamboo weaving gradually developed towards craftsmanship. The decorativeness of their patterns has become stronger and stronger, and the weaving has also become more sophisticated. In the Song and Yuan Dynasties, bamboo weaving far exceeded practicality and reached the ornamental level. Plain and natural bamboo weaving has also become an ideal flower arrangement tool for elegant and refined literati.

In the beginning, bamboo woven items were only used as utensils in life, such as fishing gear, large sieves, and dustpans. The dustpan can scoop out the millet or rice, so as to be used for catching fish and picking gravel.

In addition, there is a bamboo basket, also known as a meat basket. Before there was no refrigerator or bamboo kitchen, it was a bamboo basket for holding fish and meals. Not only can it be carried, but it also can be hung on a bamboo pole on the roof beam.

The bamboo basket is made of bamboo sticks, and its shape is similar to that of a vegetable basket. It has fine holes for air circulation. A lid is installed at the edge of the basket to cover it tightly to prevent dust or mosquitoes from contaminating food.

With the development of social civilization, the art of bamboo weaving has also been continuously innovated, from the production of daily necessities to the development of character painting and calligraphy, and the production of high-grade bamboo crafts and bamboo furniture. Bamboo products are ancient Chinese household items. Bamboo products made by hand have become a must-have item for modern homes due to their sense of history and environmental protection. Although modern bamboo craftsmanship still retains strong practicality, it is unique in design inspiration from an aesthetic point of view and is widely used in various fields. From common daily necessities such as bamboo baskets, flowers, tea sets, furniture, fashion handbags, interior decoration lighting, etc.

As a craftmanship, the production process of bamboo woven products is complex, through designing model drawings, drawing tool drawings, making molds, breaking bamboo, and then weaving.

The appearance of the traditional bamboo woven embryo body is inlaid, knitted, and inserted with various concave and convex three-dimensional woven flower patterns; dyed with two layers of color, and then the protruding parts of the pattern are polished with sandpaper to show the differentiated woven pattern. The whole procedures are complicated and complicated.

The cross-section of the bamboo wire used for bamboo weaving is all rectangular, which has strict requirements on thickness. The thickness is only one or two hairs thick, and the width is only four or five hairs wide. The root bamboo wire passes through the uniform knife to achieve a uniform thickness. The thickness is consistent, and the viewers who see it must praise its extraordinary. The traditional bamboo weaving process has a long history and is rich in the hard work of the working people. Bamboo crafts are divided into fine silk crafts and thick silk crafts. Speaking of the bamboo weave method, it is no exaggeration to describe it as “not endless”. Among more than 100 kinds of bamboo weaving methods, more types are derived according to different uses.

Bamboo weaving has undergone a long history of evolution, from daily necessities to handicrafts to collectibles. Their shape is changeable, and the decorative features are full of form and art, giving us a unique aesthetic experience. From the selection of materials to the preparation process, every process must be strict and accurate. Improper bamboo collection time can easily cause bamboo worms or mold, bamboo age selection determines the bamboo’s flexibility, and thus determines the difficulty and aesthetics of bamboo preparation. Although Chinese traditional bamboo weaving is not a magic technique, it can better reflect the ideology and cultural connotation of the harmonious unity of man and nature emphasized by the traditional Chinese concept of creation, “Heaven and Man.