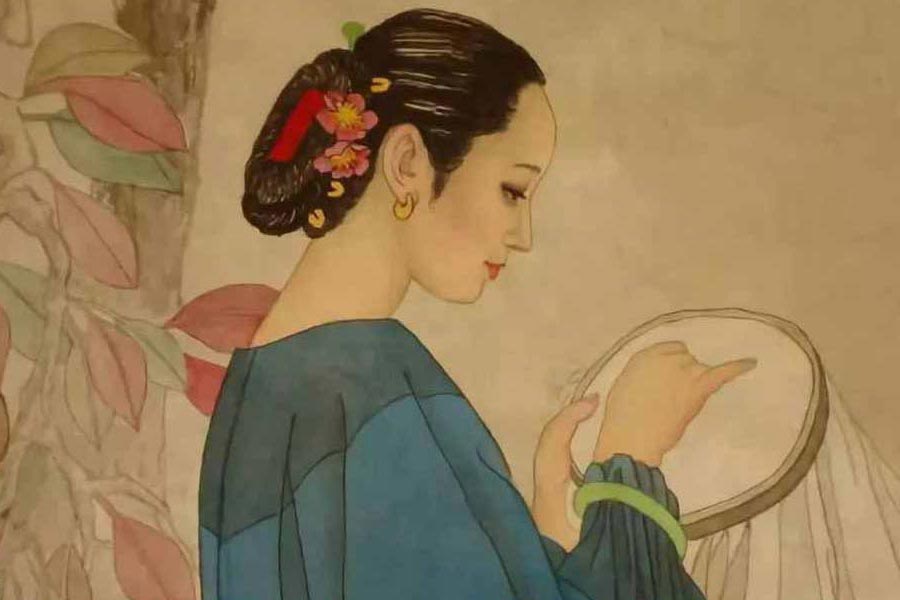 Chinese embroidery, also known as silk embroidery or needle embroidery, is one of China’s outstanding folk arts. China is the earliest country in the world to discover and use silk. People in China started raising silkworms and making silk fabric at least 5,500 years ago. Embroidery was called “female red” or “needlework” in ancient China because it is mostly made by women. During the Feudal Time, a woman would make several pairs of shoes as proof of her needlework ability, as well as her small feet. The principle of embroidery is to use needles to pass threads of different colors and materials through the textures of various materials to form various characters and patterns on the fabric. In ancient China, if a girl is good at embroidery, she will be praised as an ingenuity girl to be liked. Looking at these dazzling embroideries, every needle and thread is a symbol of wisdom.

The origin of Chinese embroidery

It is said that there was a smart and beautiful girl in ancient Suzhou who was making a new dowry before getting married. In the process of making it, she accidentally poked a hole in the shirt. She anxiously embroidered a small flower with colored velvet, which not only concealed the hole but also looked particularly beautiful. Inspired for the first time, smart folk people in Suzhou became loved wearing embroidered clothes ever since. According to the Shuoyuan written by Liu Xiang in the Western Han Dynasty, as early as the Spring and Autumn Period (771 BC–476 BC), Wu people began to apply embroidery techniques as accessories for decoration. By the time of the Three Kingdoms, Su embroidery had developed to a higher level.

The development of Chinese embroidery

The discovery of the oldest embroidery works in the world are the embroideries unearthed from Chu Tomb in the Warring States, now in Changsha province, China. In ancient times, the embroidery was primarily a tribute to the upper or ruling class, especially to the royal land. At first, only high-ranking nobles could have exquisite embroidery, such as clothing and accessories, which would be accompanied by embroidery. The dragon robes of ancient emperors were all embroidered with dragons in gold thread, so as the queen’s phoenix robe, both symbolizing the noble and supreme status of the royal family. Due to the relaxation of the system, the embroideries gradually spread from the palace to folklore, in the form of blessings, weddings, and housewares. Although inheritance is no longer restricted by class status and ethical principles, some patterns and colors endowed with Chinese characteristics are still reflecting the tradition and emotions of the Chinese people.

In the 17th century, refined and exquisite oriental-style embroidery products were imported to Europe through the Silk Road and immediately became popular among those rich and royal nobles. Marco Polo was dazzled by this astonishing traditional Chinese craft, and these Chinese-style embroideries floated across the ocean with merchant ships, sweeping Western high society and becoming a world-renowned Chinese luxury product. Since then, traditional Chinese embroidery has started to integrate all over the world. The most significant difference between European embroidery and Oriental embroidery is that Orientals are good at expressing flowers, birds, characters, and landscapes with various stitches and the main embroidery material are silk threads. While Europeans are more focused on various embroidery materials, pearls, finely ground shells, gemstones, and even gold chains. Threads are not limited to silk threads. Linen, cotton, and wool are also common embroidery materials.

Nowadays, embroidered patterns have been used on daily necessities, such as quilt covers, pillowcases, cushions, and shoe uppers. Many women in Chinese folk can also embroider simple patterns, and even started to use machines to make them. Mankind invented the “needle”, which gave mankind a vast material and cultural space. Our ancients used bone needles and animal tendons to make clothes and unconsciously invented embroidery. With the development of the times and the progress of human civilization, this unconscious thread has gradually developed into embroidery that people need. From unconscious use to conscious production, even the expansion of basic functions, embroidery, as a material carrier, generates through long years of life practice and exchanges by human practice and gradually becomes a daily necessity.

The four famous embroideries of China

With a history of more than 2,000 years, Su embroidery is the general name for embroidery products in areas around Suzhou, Jiangsu Province. The craft, which dates back to the Three Kingdoms Period, became a sideline of people in the Suzhou area during the Ming Dynasty when almost every family kept silkworms and did silk embroidery.

Well known for its smoothness and delicateness, Su embroidery won Suzhou the title City of Embroidery in the Qing Dynasty. In the mid and late Qing, Su embroidery experienced further developments with the invention of double-sided embroidering. There were as many as 65 embroidery stores in Suzhou City at that time. During the Republic of China period, the Su embroidery industry was in decline due to frequent wars and it was restored and regenerated after the founding of new China. In 1950, the central government of the PRC set up research centers for Su embroidery and launched training courses for the study of embroidery. Stitching methods have developed from 18 to the present 40 kinds.

Su embroidery features a strong folk flavor and its needling techniques are characterized by the following: the product surface must be flat, the rim must be neat, the needle must be thin, the lines must be dense, the color must be harmonious and bright and the picture must be even. Su embroidery products fall into three major categories: costumes, decorations for halls, and crafts for daily use, which integrate both decorative and practical values. Double-sided embroidery is an excellent representative of Su embroidery.

Xiang embroidery is well known for its time-honored history, excellent craftsmanship, and unique style. The earliest piece of Xiang embroidery was unearthed at the No.1 Tomb of Mawangdui, Changsha City of the Han Dynasty. The stitching technique was almost the same as the one used in modern times, which demonstrated that embroidery had already existed in the Han Dynasty.

In its later development, Xiang Embroidery absorbed the characteristics of traditional Chinese paintings and formed its own unique characteristics. Xiang embroidery experienced its heyday at the end of the Qing Dynasty and in the early Republic of China (early 20th century), even surpassing Su embroidery. After the founding of the People’s Republic of China, Xiang embroidery was further improved and developed to a new level.

Shu embroidery, also called Chuan embroidery, is the general name for embroidery products in areas around Chengdu, Sichuan Province. Shu embroidery enjoys a long history too. As early as the Han Dynasty, Shu embroidery was already famous. The central government even designated an office in this area for its administration. During the Five Dynasties and Ten States periods, a peaceful society and large demand helped the rapid development of the Shu embroidery industry.

Shu embroidery experienced its peak development in the Song Dynasty, ranking first in both production and excellence. In the mid-Qing Dynasty, the Shu embroidery industry was formed. After the founding of the People’s Republic of China, Shu embroidery factories were set up and the craft entered a new phase of development, using innovative techniques and a larger variety of forms.

Originating among the folk people in the west of Sichuan Province, Shu embroidery has been influenced by the geographical environment, customs and cultures and has formed its own unique characteristics of being smooth, bright and neat. Altogether, there are 122 approaches in 12 categories for stitching. The needling characteristics lie in the even stitches, bright threads, closeness and softness in texture.

The works incorporated flowers, birds, fish, worms and human figures, and landscapes, as their themes. Its craftsmanship is a combination of fine arts and practical uses. Its products include quilt-facing, pillowcases, clothes, slippers, scrolls, etc.

Also called Guang embroidery, Yue embroidery is a general name for embroidery products of the regions of Guangzhou, Chaozhou and Shantou, Zhongshan, Fanyu and Shunde in Guangdong Province. According to historical records, in the first year of Yongzhen’s reign (805 AD) during the Tang Dynasty, a girl named Lu Meiniang in Nanhai County, Guangdong Province embroidered the seven volumes of the Fahua Buddhist Scripture on a piece of thin silk about 30 centimeters long, making Yue embroidery famous all over the country. The prosperous Guangzhou Port of the Song Dynasty promoted the development of Yue embroidery and its products began to be exported. During the Ming Dynasty, folk embroidery artists employed animal hair as the raw material for Yue embroidery, which made the works more vivid. During Qianlong’s reign of the Qing Dynasty, the first Yue embroidery industrial organization was established in Guangzhou. At that time, a large number of craftsmen devoted themselves to the craft, inciting further improvements to the stitching technique. Since 1915, the work of Yue embroidery garnered several awards at the Panama Expo.

Influenced by national folk art, Yue embroidery formed its own unique characteristics. The embroidered pictures are mainly of dragons and phoenixes and flowers and birds with neat designs and strong, contrasting colors. Floss, thread and gold-and-silk thread embroidery is used to produce costumes, decorations for halls, hanging screens and works for daily use.