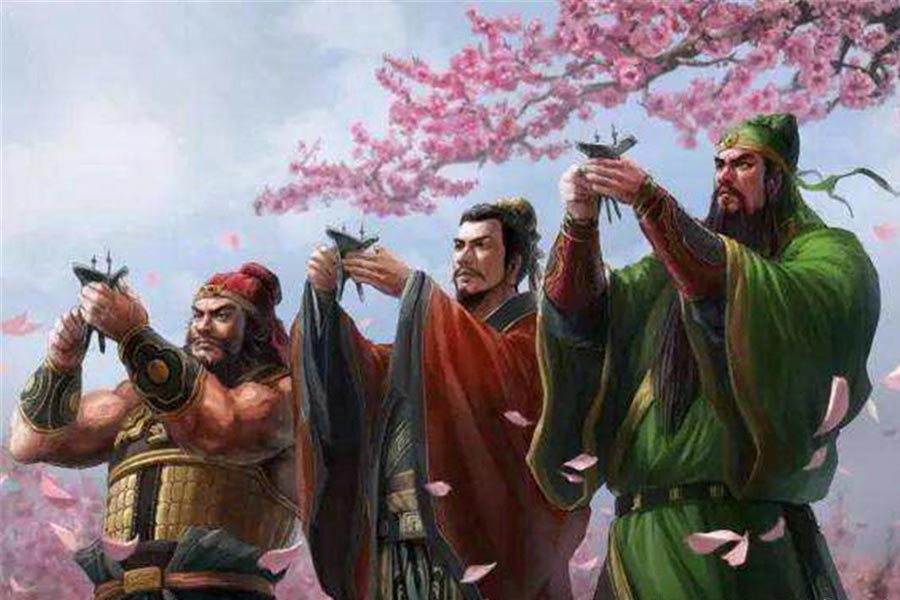 During the final years of the Eastern Han Dynasty (25 – 220), the government was corrupt and unable to carry out any good policies. In addition to that, there were years of drought which caused famines, so the people lived very difficult lives. In the face of such a situation, Liu Bei (161 -223) sighed. Suddenly, someone behind him shouted, “Why does a man sigh but not contribute to the country? ” He turned to see the speaker, who was eight feet tall, with a head like a leopard’s, standing there with a forceful presence. This man introduced himself, “I am Zhang Fei (? -221).” The two men took an instant liking to each other and greeted each other like long-lost friends, so they decided to go for some wine and more conversation.

While they were drinking, a man, nine feet tall, with a very long beard, came in for a drink. Liu thought that this man looked different from ordinary people, so he decided to get to know him and invited him to join them for a drink. He went up to the man and asked for his name. The man replied, “I am Guan Yu (? – 220). In my village, there was a villain who bullied the others, I was so angry with him that I simply killed him. Since then, I have been in hiding for five years.” Both Liu and Zhang respected Guan a lot. The three men felt that they shared a lot of common ideas and interests, so they decided to go to the Peach Garden (also known as Taoyuan) where they had a brotherhood ceremony to become sworn brothers.

It was said that during the brotherhood ceremony, they had no idea who should be the eldest brother, so Zhang pointed to a tree and suggested that they could be ranked according to their speed in climbing the tree. The other two agreed. Zhang was very strong, so he was the quickest of the three. Guan was second, while Liu, who was not very strong physically, ended up last. Zhang was so proud and happy, expecting to be the eldest brother, but at that time, Liu said, “Let’s consider the growth of a tree. Obviously, the root of the tree came first, then its trunk and branches, and finally the tips. In this case, as the tree grows from the bottom to the top, it would be more reasonable for the person who is at the bottom part of the tree to be the eldest, and the one who is at the top to be the youngest.”Upon hearing this, Zhang and Guan completely agreed, so Liu became the eldest brother among them.

According to the history books, the three of them made a promise to work together to form a force and protect the emperor; they would remain loyal to the royal family and would put people’s interests first in their hearts. It sounded easy, but it wasn’t. At that time, the royal family was very weak, and the emperor was just a young kid, so the emperor was under great pressure all the time from other generals and warlords, who were also fighting among themselves in order to gain full control of the country. Liu was a good politician, a great thinker and clever in making speeches, while Guan was a great general, as he remained calm under any conditions. As to Zhang, he was very brave and physically very strong, and thus a very good warrior. The three brothers, known as Liu-Guan-Zhang, made use of their own talents to build their forces from scratch until they were one of the three main armies occupying southwestern China. One other promise they made when they became brothers, which became very famous, was the promise that even though they were not born on the same day, they aspired to die on the same day at the same time. Unfortunately because of the war, this did not come about.

This legend in addition to the fact that the period saw three great kingdoms struggling with each other became one of the most interesting times in Chinese history. People were so fascinated by the stories from this period that one of the best four Chinese novels slightly embellished was written based on known facts and is known as Romance of the Three Kingdoms(or Sanguo Yanyi). The story of Liu-Guan-Zhang gained increasing legendary status and was passed on for generations.