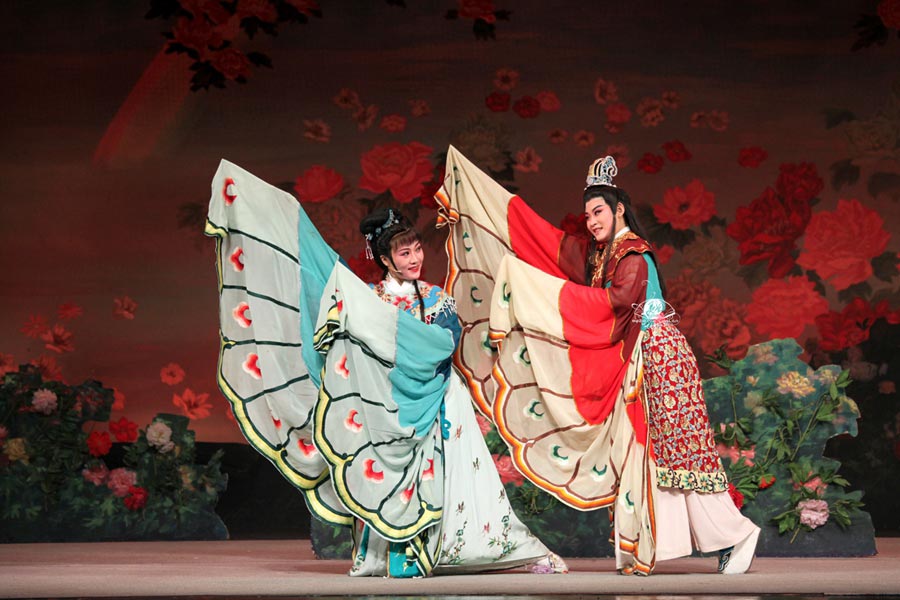 In the West, the tragedy of Romeo and Juliet has long been one of the greatest stories ever told. It has also been recreated in many different forms, like dramas, operas, films, ballet, orchestra, and television drama. Coincidentally, there is a story very similar in China too which has been reproduced in various forms of art. It is amazing that this story, the love story of Liang and Zhu, is still mentioned in the lyrics of some pop songs nowadays. There is even a saying that goes like this: “If a couple wants their love to last forever, they must pay a visit to the temple of Liang.”

During the Eastern Jin Dynasty (317 – 420), there was a girl called Zhu Yingtai. She was bright and had always hoped to go to school. The problem was, at that time, girls were not allowed to go to school. The tradition back then was that girls were to stay at home, where they would learn to weave, tailor, read and play musical instruments. One day, Zhu came up with an innovative idea — she dressed herself up as a boy and begged her parents to allow her to go to school. Seeing that their daughter was so determined, they had no other option but to give in.

On her way to school in Hangzhou, Zhu met Liang Shanbo, a fellow student. They got along very well and shared many common interests and future goals between them, so in the next three years in school, they became really close friends. Zhu even developed romantic feelings for Liang, however, since he was rather insensitive, he did not feel anything. Sometime later, Zhu’s father asked her to return home. Before leaving Hangzhou, she tried to fix a marriage between Liang and herself by asking him to marry “her sister”. At the same time, she also told the wife of their teacher that she had pretended to be a man, and asked her to relay this message to him.

After learning that Zhu was in fact a girl, he tried his best to rush to her home. Unfortunately, when he arrived, he was told that her father had already agreed for her to be married to Ma Wencai, the son of the town governor. The two of them finally met, but their meeting was overwhelmed by sadness and frustration, as it was impossible for them to get married. Afterward, he decided to leave, since there was nothing he could do to change the situation. He passed away shortly after arriving home. The news of his death finally reached Zhu, and she decided to remain loyal to him forever.

The day of marriage eventually arrived. The Ma family followed the traditional customs and sent a carriage over to the Zhu family to pick her up. On the way to the home of the Ma family, she insisted on being taken to Liang’s tomb. Upon arrival, she got off the carriage, and thinking of him, tears came rolling down her face. All of a sudden, a thunderstorm came from nowhere and Liang’s tomb cracked open; she seized the chance and jumped into the hole created by the gap. After jumping in the tomb closed up as it was before the arrival of her carriage. Moments later, a couple of colorful butterflies appeared from the tomb and flew away. And that was how the story ended.

This romantic story showed that traditional marriages were often determined by two major factors: one, the will of the parents; and two, the status of the two families involved in the marriage. There was nothing that Zhu could do about it so she decided to use her death to speak for herself. The story also reflected how the ancient Chinese thought about love. They believed that lovers should be buried in the same space so that the love and marriage that could not exist in the real world could carry forward into the afterlife.