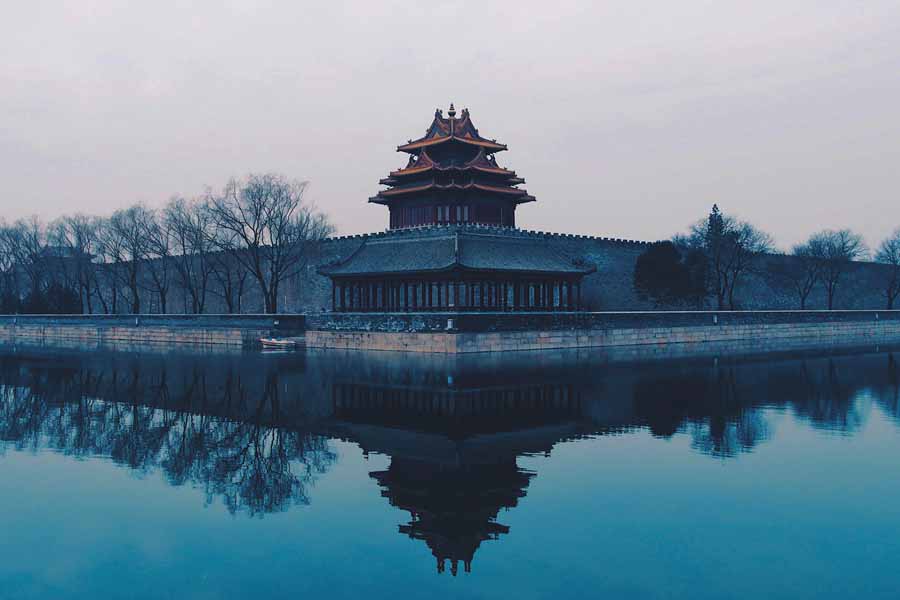 During the 2,000 years of feudal empire from the Qin and Han dynasties to the Ming and Qing dynasties, China had numerous prosperous histories and naturally gave rise to several large and prosperous cities that were far ahead of the world, with prosperous markets and large populations, many of which were known as the world’s largest cities at the time.

Here we will see ten of the most important capital cities of ancient China, including names, history and descriptions.

It is located in north-central China. It was called Chang’an in ancient times. Considered the cradle of Chinese civilization, it has existed for over a million years; the ape-man in Lantian is proof of that. The city was the capital of the Zhou, Han, Tang, and 12 other dynasties. A total of 73 Chinese emperors ruled here. It is reputed to be one of the “Four Ancient Cities Cradle of World Civilization” along with ancient Athens, Cairo and Rome. It has an area of approximately 84 square kilometers and is surrounded by a wall 25.7 km long and a moat 6.13 m wide. This ancient capital prides itself on its striking buildings, in particular the Temple of Heaven, built on a platform made of rammed earth with four concentric rings. Chang’an was inhabited long before Neolithic times. It was at this time that the Yangshao Culture managed to establish itself in the suburb of the city of Banpo. Also in the immediate vicinity, the infamous Qin Shi Huang of the Qin Dynasty, kept his imperial court along with his magic mausoleum, protected by a massive terracotta army.

Located west of Henan Province, Luoyang is situated within the middle reach of the Yellow River, surrounded by mountains and plains. It was founded in the mid-eleventh century BC, at the beginning of the Zhou Dynasty (1046 – 256 BC), near the current western city, as the residence of imperial kings. It became the capital of Zhou in 771 BC and was later moved to a site northeast of the present-day eastern city. It was named Luoyang because it is located north (yang) of the Luo River, and its ruins are now distinguished as the ancient city of Luoyang. It was the capital of 13 dynasties. With the longest history, it was listed as the largest city in the world six times throughout history. From the Shang and Zhou Dynasties to the Sui and Tang Dynasties, Luoyang was once the beginning of the Silk Road in Eastern countries. Which has contact with countries in Europe, North Africa and Asia.

It is located in the North China Plain in the north-central part of the country. As the capital city of China, it is world-famous and fully preserved. It has taken 700 years to become a political center, but as an ancient city, as well as a regional country, it has at least 3000 years of history. It was called Jin City in the Western Zhou Dynasty (11th – 771st century BC). Since Emperor Qin united China in 221 BC, Beijing has played an important role in northern China. It was the capital city in the Liao (916–1125), Jin (1115–1234), Yuan (1271–1368), Ming (1368–1644), and Qing (1644–1911) dynasties. During these 800 years, 34 emperors lived and ruled here. The famous Forbidden City was built during this period. The current name ‘Beijing’ originated more than 500 years ago during the Ming Dynasty (1368 – 1644). In 1403, Zhu Di took the throne. After that, it moved the ancient capital to Beijing and then changed its name to Beijing. In 1406, the Ming Dynasty rebuilt the city of Beijing. The original imperial palace built during the Yuan Dynasty had been burned down during the time Zhu Yuanzhang overthrew the Yuan Dynasty. The imperial palace rebuilt during the Ming Dynasty is the Forbidden City in Beijing today. The construction, design, structure and other aspects of this building exemplify the excellent quality of ancient Chinese architecture.

This city has about 2700 years of history. It is the ancient city that is best preserved completely, as well as the model of Han reconciliation. In the development of Chinese history, it shows a complete picture of culture, society, economy, and religion. Pingyao Ancient Town is located in the center of Shanxi Province, northern China. It was first built during the reign of King Xuan of West Zhou (827 – 728 BC) and expanded in the third year during the Hongwu reign of the Ming Dynasty (A.D. 1370), more than 2,700 years ago. Currently, the fortress of the Ming and Qing County dynasties (1368 – 1911) basically looks the same as it was, due to its proper preservation, and can be categorized as the most intact ancient city in the area of the Han Nationality in China. As it is known to everyone, there are three kinds of treasures in Pingyao and the ancient city wall is one of them. The ancient city wall of Pingyao is approximately 6 km long, with 3,000 battlements and 72 observation towers, believed to represent the master’s 3,000 disciples and 72 saints. Despite 600 years of erosion by wind and rain, the wall remains grand and majestic.

As a historically and culturally famous city, Nanjing has around 2,470 years of history. About 300,000 years ago there were people who lived there. 6,000 years ago, there were mainly villages. Its long history, splendid culture and magnificent view has been recognized for hundreds of years. Nanjing, the capital of six different dynasties throughout history, is the provincial capital of Jiangsu Province, China. Its historical, political and location attributes have already propelled Nanjing to become one of the sub-centers of the Yangtze River Delta (YRD), China’s emerging cosmopolitan city region.

As one of the 24 historically and culturally famous cities listed by the State Council, Yangzhou boasts a history of 2,500 years. It achieved prosperity in the Han, Sui, Tang and Qing Dynasties. It used to be an important center of business and maritime and land transport. Located at the intersection of the 1,100-mile-long Grand Canal and the Yangtze River, the ancient city of Yangzhou used to be a hub for trade along the ancient Silk Road. Built-in 486 BC during the Spring and Autumn Period (770 – 476 BC), Yangzhou became a famous port city after the construction of the Grand Canal during the reign of Emperor Suiyang in the Sui Dynasty (A.D. 581 – 618).

As the hinge of water transport and the largest salt distribution center in history, Yangzhou was one of the 10 largest cities in the world in the early 19th century, along with Beijing, Nanjing and Guangzhou, boasting a population of more than half a million.

As early as 4,700 years ago, it was discovered that humanity lived and produced in the Liangzhu culture. It was the capital of the Wu Yue Dynasty and the Southern Song Dynasty, as well as one of the seven ancient capitals. During the time of the Southern Song Dynasty, Hangzhou was the capital for 150 years. The archaeological discovery of the ruins of the ancient city of Liangzhu in 2007 carried the recorded history of the Hangzhou civilization many more years ago.

As an ancient cultural city, it has participated in two miracles in the history of China; one is that its name will not be changed for 2,000 years, and the other is that it has always been the capital city of the Sichuan region. It can be seen as one of China’s capital cities with glorious history. Chengdu is one of China’s earliest cities to achieve steady and continuous development and prosperity. In terms of detailed historical information, the city of Chengdu was built in 316 BC by Zhang with a history of more than 2,300 years. However, according to Jinsha and other cultural relics, the highly developed civilization of Chengdu appeared at least 4,000 years ago. It is the birthplace of the Bashu Culture. During the Spring and Autumn Period (fourth century BC), the fifth emperor Kaiming moved the capital to this place and gave the city the name of Chengdu, and so it has continued ever since. Chengdu has thus become the rare city in China, which has not changed its name since it was built. Papermaking is a great invention that China brought to the world and Chengdu led the way in the papermaking technique since it was first invented there (around A.D. 600 – 1200). The paper produced in the city during the Tang Dynasty (A.D. 618–907) was officially chosen as the paper for printing imperial decrees and edicts, as well as books for the State Library.

Woodcut is another great contribution China made to human civilization, and this printing technique also originated in Chengdu. Among the Chinese Dunhuang documents stored in the Museum of London, the almanac printed in Chengdu, using the woodcut technique, circa A.D. 220, is the first of its kind seen in the world. In the Song Dynasty (A.D. 960-1279), Chengdu was one of China’s three major printing bases, and the level it reached in printing by that time was unparalleled throughout the country. Chengdu is also a city renowned for its craftsmanship. The lacquer-covered products produced during the Warring States Period and the Han Dynasty (around 200 BC) enjoyed a great reputation internally and externally.

Anyang, located in Henan Province in northern China, was the center of a sophisticated Bronze Age civilization during the Shang Dynasty (商朝; 1,554 to 1,054 BC). Anyang served as the capital of the Shang Dynasty. As one of the cradles of Chinese culture, it has a unique cultural history. Already 25,000 years ago, our ancestors lived. Many legends like the waterways regulated by DaYu, the developments of King Wen, the woman who volunteered for military service, the SuQin appointed prime minister, and so on. The rulers of the Shang Dynasty organized an immense construction there and eventually turned Yin into a great capital in ancient China. After that, some other kingdoms in the Central Plains (comprising the middle and lower stretch of the Yellow River) also chose Anyang as the capital, but no other achievements were made regarding the construction of the city. This ancient city was reduced to ruins as a result of countless wars. After the Song Dynasty (sòng cháo 宋朝), cultural and architectural relics from Yin times were progressively discovered, especially in several large-scale excavations, after the founding of the People’s Republic of China.