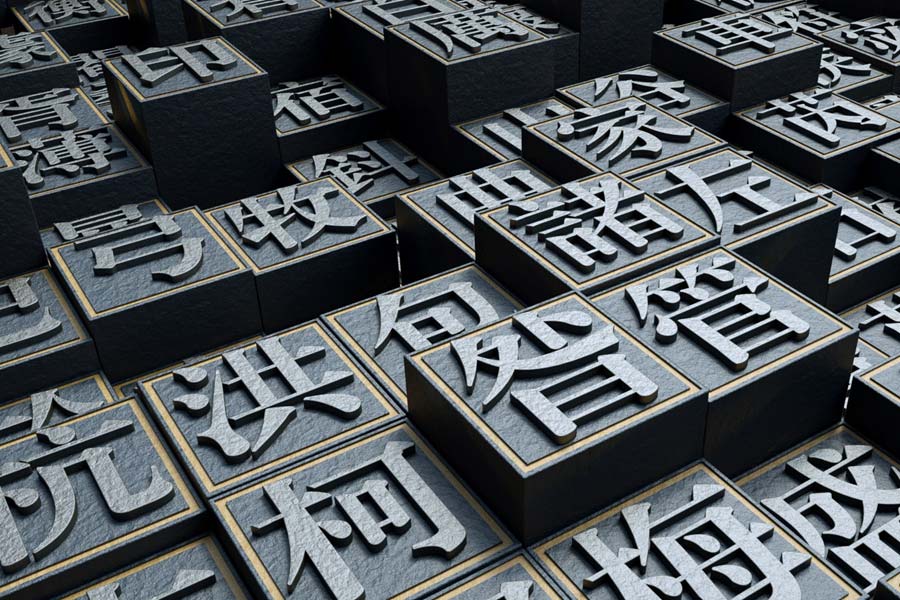 The official language of the People’s Republic of China (PRC for short) is Chinese, which is based on the northern dialect. It is usually referred to in the west as ‘Mandarin’, but the Chinese call it Putonghua. Putonghua is variously referred to as the Han language (Hanyu), the ‘national language’ (Guoyu) or ‘simply Chinese’.

The Chinese language is among the most beautiful languages in the world. The Chinese characters have been used for the longest time, over the widest area and by the largest number of people in the world. It is the epitome of the wisdom and creativity of the Chinese people and the carrier and manifestation of the specific patterns and features of Chinese thinking, and the rich cultural heritage. To understand the Chinese, one should set about understanding their language.

The Origin of Chinese Characters

Anyhow, the invention of a language is a great achievement that can neither be done by a deity nor can it be made by a single person in his lifetime. Its appearance and growth into maturity have to undergo a fairly long period of trial and experiment by the masses of the people to meet the needs of social life and activities of production.

In ancient China, characters began as simple drawings of natural objects – trees, rivers water, mountains and hills, horses and oxen, human beings themselves, etc. The earliest character-like drawings are thus “pictographic” in quality. Compared with other scripts in the world, Chinese characters appeared much earlier with the first evidence of the characters around 5,000 or more years old. More than 50 kinds of carved symbols appeared around the Banpo Site and other nearby places. They were structured and arranged in a certain order, having simple strokes and regular shapes, such as the vertical stroke, horizontal stroke, bevel stroke, and angular stroke, and they have the same characteristics as today’s simple characters – scholars deem them to be the original Chinese characters. From the grey pottery in the Dawenkou Cultural Ruins were found some carved pictographic signs. In fact, these signs became the later pictograms.

The Evolution of Chinese Characters

The most important change in Chinese writing since the standardization in the Qin Dynasty occurred in the middle of the 20th century. In 1949, the People’s Republic of China (PRC) introduced simplified characters to replace the traditional Kaishu characters. In addition to Mainland China, Singapore also adopted this script. However, other Chinese-speaking places such as Taiwan, Hong Kong, and various Chinese communities in Southeast Asia and the Americas rejected this new system and continued to use the traditional script.

The Chinese characters are a meaning-oriented character system based on pictograms and consisting of pictographic-phonetic characters. The total number of characters is around 56,000, most of which are archaic and only 3,000 are used frequently. They are used to construct an infinite number of sentences and meanings.

In the course of historical development, the coinage of Chinese characters has undergone tremendous changes. At first, pictograms dominated and later were dominantly replaced by pictographic-phonetic characters. The system of Chinese characters incorporates sounds, forms as well as meanings. Simply put, Chinese words have the following special characteristics：

The Formation of Chinese Characters

As is well known, written Chinese is not an alphabetic language, but a script of ideograms. Their formation follows three principles：

1) Hieroglyphics or the drawing of pictographs

As explained before, this was the earliest method by which Chinese characters were designed and from which the other methods were subsequently developed.

These picture-words underwent a gradual evolution over the centuries until the pictographs changed into ‘square characters’, some simplified by losing certain strokes and others made more complicated but, as a whole, from irregular drawings, they became stylized forms.

The principle of forming characters by drawing pictures is easy to understand, but pictographs cannot express abstract ideas. So the ancients invented the “associative compounds”, i.e., characters formed by combining two or more elements, each with a meaning of its own, to express new ideas. Thus, the sun (日) and the moon (月) written together became the character ‘明’, which means bright; the sun (日) placed over a line (一) representing the horizon formed the ideogram ‘旦’, which means sunrise or morning.

Though pictographs and associative compounds indicate the meanings of characters by their forms, neither of the two categories gives any hint as to pronunciation. The pictophonetic method was developed to create new characters by combining one element indicating meaning and the other sound. For instance, 爸ba the Chinese character for ‘papa’ is formed by the element 巴ba which represents the sound and the element 父fu which represents the meaning of father. Likewise, the character 芭ba is formed by 巴 (the sound) and ‘艹’, indicating a plant. In this way, more and more characters were made until such pictophonetics constitute today about 90% of all Chinese characters.

Chinese grammar is much simpler than that of European languages. There is no article (a, an, the), no tenses, and no plurals. The basic point is that, like English, Chinese word order is subject-verb-object. In other words, a basic English sentence like “I (subject) love (verb) you (object)” is constructed in exactly the same way in Chinese. The catch is mastering the tones.

Chinese is a language with a large number of words with the same pronunciation but a different meaning; what distinguishes these “homophones” is their “tonal” quality – the raising and lowering of a pitch on certain syllables. Chinese has four tones – high, rising, falling – rising and falling, plus a fifth “neutral” tone which can be all but ignored. The pronunciation of the Chinese words to indicate four kinds of lifestyle for getting weight is “tang”. When pronounced with the four tones respectively, it means having a lot of soup or broth, favoring sugar or sweet food, sleeping or lying excessively, and eating food while it is boiling hot, and they will surely make a person put on extra weight. The variation of tones not only affects the meaning but also the grammatical functions.

The Chinese 1958 adopted a system of writing their language using the Roman alphabet. It’s known as pinyin. Since 1979 all translated texts of Chinese diplomatic documents, as well as Chinese magazines published in foreign languages, have used the pinyin system for spelling names and places, pinyin replaces the old Wade-Giles system of Romanizing Chinese script. Thus, under pinyin, ‘Mao Tse-tung’ becomes Mao Zedong, and ‘Peking’ is now read as Beijing. The name of the country remains as it has been written most often into ‘China’ in English and German, and ‘Chine’ in French – in pinyin it’s ‘Zhongguo’. The same is true of some other names which still remain as they are, such as ‘Peking University’, and ‘Qiang Kai-shek’, for they are already widely accepted worldwide.

As it is said that in the light of examining the cultural traits of a nation it is imperative to acquire a perspective through a window of its language and script. Language and script function as a threshold leading human beings from ignorance to civilization. The language and script of every nation are not molded at random, but hinge on the features and patterns of thinking of that nation, carrying its rich cultural contents. Thus the Chinese language truly and fully presents the way of life and the thinking pattern of the Chinese.