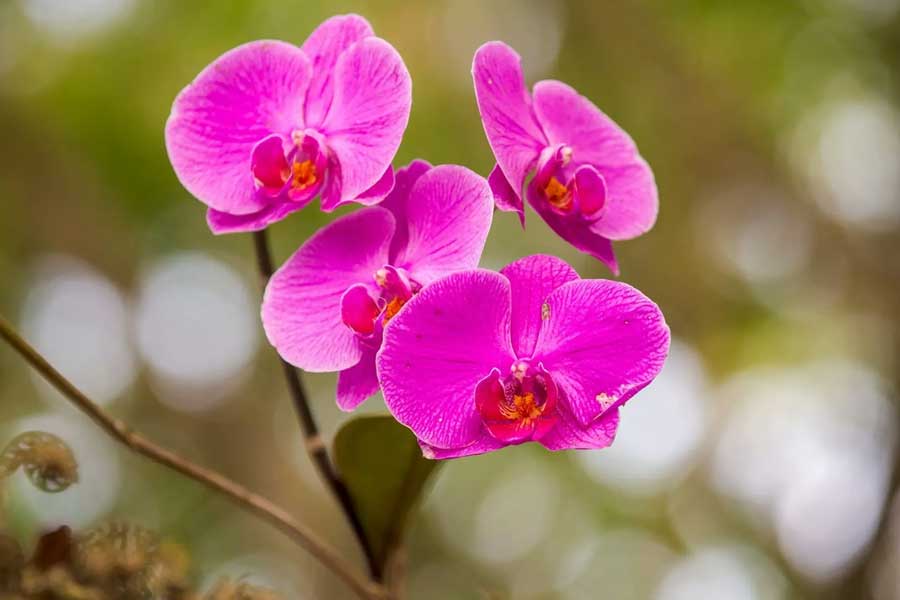 China particularly loves its native lotus flowers, camellia, azalea, peonies, chrysanthemums, etc. Perfumed and exquisite, these flowers are symbols of purity, perseverance, renewal and devotion. Being the favored subject of poets and painters, they are frequently reproduced, along with other favored national themes, in art and literature.

The Chinese Top 10 Famous Flowers were nominated in 1987. They are the plum blossom, peony, chrysanthemum, orchid, Chinese rose, azalea, camellia, lotus, sweet-scented osmanthus and narcissus. These flowers are not only loved for their floriated beauty but also favored for their ample and lucky meaning.

Plum blossom is evaluated as the No.1 of the Chinese Top Ten Famous Flowers. The five petals of the plum blossoms symbolize happiness, good luck, longevity, smooth sailing, and peace.

When whirling snow obscures the sky and all other flowers wither and fall, only plum trees stand upright proudly and bloom in rich colors bringing people the news of early spring. With the characteristic of cold resistance, plum blossom stands for courage, hope and new life.

Beautiful and graceful, peonies have been renowned for their noble beauty ever since the Tang Dynasty. The flamboyancy of the peony exceeds any flowers, so people have named it “the king of flowers” and regarded it as a symbol of happiness, prosperity and spring in China. Peony is also an omen of good fortune, an emblem of love and affection, wealth and distinction, feminine beauty, and the sign of spring.

Peony cultivation in China can date back to 1,600 years ago. The peony is regarded as the most beautiful and charming flower and has a prestigious reign in the flower world of China. Chinese people have been enthralled by the beauty of the flower and it has been the favorite flower from the imperial down to the common in Chinese history. The flowers are colorful, fragrant and very elegant and pleasant-looking in appearance with a variety of over 500.

Chrysanthemum is a famous traditional flower in China. Some varieties of chrysanthemum are effective to treat some diseases, and some are edible, both delicious and nourishing. Chinese people have the convention of viewing and admiring chrysanthemums in autumn. In late autumn, there are chrysanthemum exhibitions in many places in China. Chrysanthemum is described by Zhou Dunyi, a literary man of the Song Dynasty, as a hermit because it was regarded as keeping a low profile and not fighting with other flowers for attention.

Peony, lotus, chrysanthemum and plum represent the four seasons in China. Chrysanthemum is also a symbol of long life or duration since its Chinese name ju sounds similar to the words meaning “remain, nine, and long time”.

Ancient Chinese favored the fragrance of the orchid and cherished it as the “Supreme Fragrance” and the “Sweetest Fragrance under the Sun”.

Orchid conveys the image of a flower of such fragrance and beauty that it makes its surroundings seem plain by comparison. It thus tends to be lonely, perhaps content in its solitude. The orchid thus became a symbol for the true gentleman in ancient China where it was revered for its esthetic and artistic value. Mention of this orchid in poetry might suggest the image the author would like to convey of himself, or of the subject of his poem.

Confucius was a great lover of orchids. He compared the orchid flower to the superior man and its scent to the pleasures of friendship. Confucius deemed it extremely important to nurture one’s spirit. He associated the good qualities of people with orchids. One of Confucius’ famous quotes is “The association with a superior person is like entering a hall of orchids.”

China is the homeland of the monthly rose with a fairly long history of its cultivation. Chinese rose was recorded in A Record of Flowers early in the Ming Dynasty as a “Permanent Spring Flower”, “Every-Month Red” and “Four-Season Flower”.

The character of permanent blooming, beautiful looking and delicate fragrance of the rose brings it the reputation of “Queen of the Flowers”. It stands for spring and magnificence. Many Chinese poems in praise of the Chinese rose have been written by men of letters and well-known personages throughout the ages.

Azalea: the Beauty of Flowers

Originating in China, the azalea is one of the Chinese traditional famous flowers. Nicknamed “Red on the mountain” and “Mountain Pomegranate”, azalea enjoys the reputation of being the crown or Xi Shi (one of the four ancient Chinese beauties) of flowers. China has a giant treasure-storage of azalea resources with the most varieties and greatest number in the world.

Azalea blooms in early spring when cuckoo cuckoos ceaselessly. So the ancient people thought the bird ululates to return home and believed that it is changed from cuckoo’s blood.

Camellia is an evergreen and broad-leaved shrub that originated in China where it is also known as “Shan Cha”. Wild camellias are found blooming in profusion in the mountains and valleys of Zhejiang, Jiangxi, Sichuan, Yunnan and Guangdong Provinces and the offshore islands in the country. In Rui’an County, Zhejiang Province grows a camellia tree 1,200 years old.

Camellia blooms during the time between winter and spring with elegant petals and rich colors. It symbolizes serenity.

The lotus is also known as “Lian Hua” and “Water Lilly”. The lotus displays its elegant beauty when it blooms in summer. In 1973, fossil pollen of lotus was unearthed in Hemudu Cultural Relic, Yuyao County, Zhejiang Province, which further proves that there was lotus pollen that existed 7,000 years ago. In the same year, two carbonized lotus seeds were unearthed in Yangshao Cultural Relic, Zhengzhou, Henan Province, which shows again that there were lotus seeds existed more than 5,000 years ago.

The lotus comes out of the mire but stays pristine. It is inwardly empty yet outwardly upright. Its noble image is very much respected and admired by people. Among all the flowers, the lotus is the most represented in poems, paintings and dances. The Lotus is also the flower dedicated to Buddha. It is one of the Eight Auspicious Symbols of Buddhism.

The lotus is of unique importance in Chinese folklore and symbolism as the symbol of peace, purity, sincerity and perfection and an emblem of summer.

Also known as“Nine-li-fragrance” (4.5 kilometers Fragrance), the sweet-scented osmanthus is only native to China. Its cultivation by the Chinese people dates back to 2,500 years. In Hanzhong, the “home of osmanthus” is located in the south of Shaanxi Province, where there are many ancient osmanthus trees. In the courtyard of the Shenshuisi Temple in Nanzheng County,7 kilometers away from Hanzhong in the southeast, there is an ancient Osmanthus blooming in profusion every autumn. It is said that this tree was planted by Xiao He, the Chancellor of Emperor Liu Bang of the Western Han Dynasty in 206 BC. Thus, it is named Han Osmanthus. As ascertained by measuring, the tree is 1840±350 years old. The tree trunk is 232 centimeters in diameter and its crown covers 400 square meters. It blooms twice a year with sweet golden flowers.

Narcissus is deeply loved by Chinese people who give it a lot of lovely aliases, for example, “Golden Calyx and Silver Desk”, “Fairy Walking over Ripples” etc. It is also known as “Heavenly Onion”, or “Elegant Garlic”. Many poems praise the firm and unadorned character of the narcissus. The most well-known laudatory title for narcissus is from Huang Tingjian‘s poem (Song Dynasty): “Lingbo Goddess treading the waves, gracefully under the soft moonlight”. The alias “fairy walking over ripples” has hence been used. In modern history, the famous woman revolutionist Qiu Jin intoned in her poem named “Narcissus”: “Delicately white as snow, exceeding the faint scent of the plum blossom.” The poem highly praises the beauty and fragrance of the flower.

Late winter and early spring witness the flowering of the year’s first narcissus. Being the messenger of spring, narcissus is cherished by many people for her elegance and her full-bodied aroma. Chinese people consider narcissus a good omen on New Year’s Day. Many overseas Chinese regards it as a holy flower of the native land. Hence narcissus proves to be the best choice as a gift for relatives and friends for the New Year.