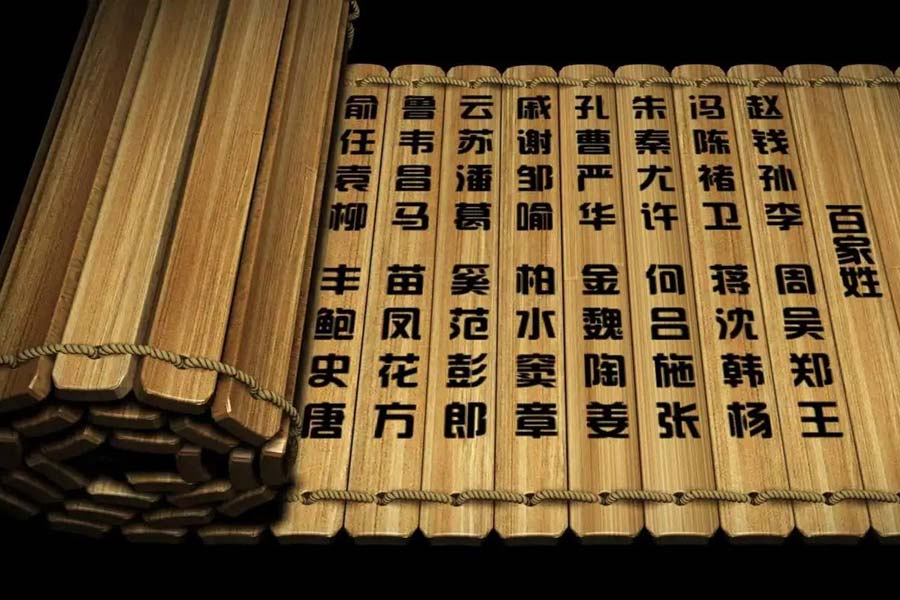 The “Hundred Family Surnames” is a classic text containing hundreds of common Chinese surnames and is written in rhyme. First compiled in the early Song Dynasty (960-1279), the text became one of the “enlightenment” textbooks in elementary education in China for nearly 1,000 years. Even today, many Chinese children can recite at least part of the text.

It is believed that the text was first compiled by a scholar living in today’s Hangzhou, the capital of east China’s Zhejiang Province. This would explain why the text begins with the four surnames — 赵钱孙李(Zhao, Qian, Sun and Li ) —which were not the most common at the time, but they were either very important or relevant to the compiler’s hometown. For instance, the first surname, Zhao, was the family name of the emperors of the Song Dynasty and Qian was the surname of the kings of the State of Wuyue (907-978 AD), which was located in the area where the believed author lived.

In Chinese, “hundred” can simply mean “a lot,” and the original “Hundred Family Surnames” actually contained 411 surnames. The list was later further expanded to 504, including 444 single-character and 60 double-character surnames.

However, according to historical records, more than 5,600 surnames had been used around China, which includes not only single-character and double-character surnames, but also three-, four- and even five-character surnames. And some ethnic groups, such as the Dai people (傣族), living mostly in southern regions, have no surnames, only given names.

Some most common family surnames in China can find their origins in primitive and matriarchal societies. As a result, many such surnames use Chinese characters containing a radical that means “female.” For instance, “姚”(Yao) has the part that means “female” on its left, while “姜” (Jiang) has the “female” as the lower part of the character.

Some of the old family surnames derive from the geographical features of places where the tribes originally lived. Today we see some common family surnames that are identical to the names of major rivers, lakes and mountains in the country.

Also, some scholars believe that a number of Chinese family surnames derive from the totems of their ancestors, such as 熊(Xiong, meaning bear), 马(Ma, meaning horse), 牛(Niu, meaning ox) and 龙(Long, meaning dragon). However, there is not enough reliable evidence to support this theory.

In order to make it easier for children to recite and memorize these surnames — as well as more than 500 Chinese characters — the “Hundred Family Surnames” was rewritten into a text of rhyming four-character verses. Therefore, more than 60 years after primary schools around China stopped using the “Hundred Family Surnames” as required teaching material, many educated Chinese people today still can recite at least a few of the most popular verses.

Over the centuries, scholars tried many times and in many ways to revise or amend the original version. For instance, one revised version published during the Qing Dynasty (1644-1911) included not only comments and annotations, but also vivid illustrations. However, a few amended versions improved the original. Probably because of the great popularity of this classic text, people in China today use its title in a very common phrase, namely “老百姓”(or Old Hundred Surnames), to mean the “general public,” the “ordinary people” or the “person in the street.”