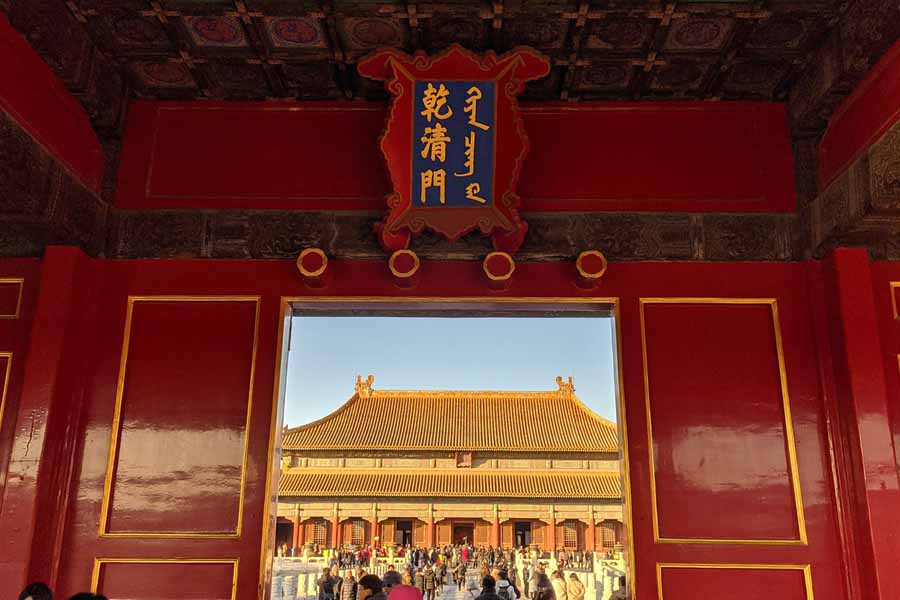 The Qing (Manchu) dynasty was China’s final imperial dynasty, lasting almost 300 years until its fall in 1911/12. At its height, the Qing dynasty was hugely powerful, achieving significant territorial expansion, growing to three times the size of the land ruled by the preceding Ming dynasty. The population also grew threefold.

The beginnings of the Qing dynasty can be traced back to around 1636 when the Manchu chief Hong Taiji (later Emperor Taizong) founded the dynasty in Manchuria in north-eastern China. Its end came in 1912 when child Emperor Xuantong abdicated following the Xinhai Revolution which established the Republic of China.

This dynasty was noted for its initial prosperity but chaotic and troubled final years, and for being only the second time that China was not ruled by the Han people.

Following the founding of the Qing dynasty in Manchuria in 1636, the Manchus frequently made raids to the south the try and gain territorial control of more of China. In April 1644 there was a raid on Ming-held Beijing led by the rebel leader Li Zicheng. The Ming dynasty officials asked the Manchus for help, but the Manchus seized the opportunity that they had been waiting for, they defeated Li Zicheng and seized the capital for themselves, establishing their own dynasty and the start of the reign of a new Qing emperor – Shunzhi.

To help stabilize the chaotic situation the Qing continued the Ming style of government and allowed some of the Ming-employed officials to remain in their jobs. But, to guarantee control over the administration of the empire, the Qing also made sure that many of the more senior government officials were Manchus.

Hong Taiji consolidated the Manchu territories that he had inherited control over from his father Nurhaci and this laid the groundwork for the conquest of the Ming dynasty, Unfortunately, Hong Taiji died before his territorial expansion mission was fully accomplished. It was only under the subsequent rule of his son, Emperor Shunzhi, that the Qing dynasty was able to conquer most of the Ming dynasty territory with Ming loyalists being driven away to the southwest of the country.

Emperor Shunzi was born in 1638, and whilst he was not the first Qing emperor, he was the first Qing emperor to rule over all of China. His short reign lasted just 17 years from 1644 to 1661. He succeeded his father Hong Taiji when he was just five years old. Because of his tender age at the time that he became emperor, two co-regents were also appointed – Dorgon, the son of the Qing dynasty’s founder Nurhaci, and Jirgalang, a nephew of Nurhaci.

In the early years of emperor Shunzhi’s reign, power lay mostly in the hands of Dorgon who was successful in conquering almost all of the Ming territory, chasing the remaining Ming loyalist groups into the southwestern provinces, and establishing a firm basis for Qing rule over all of China.

Dorgon was not a particularly popular regent. He infamously introduced the 1645 ‘hair cutting command’ which forced Qing subjects to wear the distinctive Manchu ‘queue’ hairstyle.

Dorgon died at the end of 1650 during a hunting trip. Subsequently, the still-young emperor Shunzhi started to rule himself. Shunzhi’s short reign was littered with problems, including a failed resurgence of Ming resistance, and widespread corruption. Shunzi died of smallpox in 1661 at the age of 22. Smallpox was endemic in China at the time. He was succeeded by his third son who was named as Emperor Kangxi and who reigned for an impressive 61 years, the longest reign of any Chinese emperor.

The long-ruling and successful emperor Kangxi was born in 1654 and ruled from 1661 to 1722. He was the third Qing emperor and the second to rule over all of China.  As he ascended to the throne at only seven years old, power was held for six years until he was a teenager by four regents and his grandmother, the Grand Empress Dowager Xiaozhuang.

Kangxi acted to reduce taxes, stamp out corruption and tackle government excesses, significantly cutting his own staff numbers and expenditures. He also introduced policies that helped farmers and he put an end to land seizures. New farming crops were introduced, including potatoes and corn, resulting in a new and plentiful supply of food for the population.

Emperor Kangxi also had to deal with numerous territorial threats, including Han rebellions, the capture of Taiwan, and regular invasions by Tsarist Russian forces. Kangxi sealed the Treaty of Nerchinsk in 1689, which handed over a large part of Siberia into the Chinese-ruled territory.

During Kangxi’s reign, there was a huge increase in exports, particularly cotton, silk, tea, and ceramics.

Kangxi’s successful reign heralded the start of the ‘High Qing’ era of prosperity and relative stability.

Through Kangxi’s multiple wives, concubines and mistresses, he produced almost thirty offspring. His reign ended on his death at the age of 68 and he was succeeded by the fourth prince Yinzhen who later became known as emperor Yongzheng.

Art and Culture During the Qing Dynasty

The Qing dynasty was founded on strongly conservative Confucian attitudes which impacted strongly on the arts There was a general turn against literature and stage plays as these were seen to be subversive. Books were often banned, and the authors of ‘subversive’ works were jailed, exiled, or killed. However, vernacular novels, particularly stories of romance and adventure, became very popular. After Chinese ports were opened to overseas trade in the mid-19th century, the translation of foreign works into Chinese increased dramatically.

Although conservatism tended to focus more on the past, many artists during the Qing dynasty exhibited both individualistic and innovative styles. Qing painters were mostly classified as either ‘individualist’ masters or ‘orthodox’ masters, and there were ‘schools’ of painting with the artists in each ‘school’ tending to share a common location such as Anhui, Yangzhou, and Nanjing. Whilst the paintings of the masters and the schools exhibited differences, there was a prevalence of ‘literati painting’ which emphasized personal expression above all else.

Qing porcelain displays high technical mastery. Colored glazes, such as copper or blown red (jihong) were developed during this period, and two particular classes of painted porcelain ware became popular, known in Europe as ‘famille verte’ and ‘famille rose’ because of their predominant green and rose colors.

The Qing dynasty was notable for the development and popularity of Peking opera (jingxi), particularly at the end of the 18th century. The empress dowager Cixi was also a fan during the late Qing period.

The Empress Dowager Cixi and the Boxer Rebellion

The Empress Dowager Cixi was born in 1835 and died in 1908. Cixi was a concubine of Emperor Xianfeng and a regent who effectively controlled China in the latter part of the Qing dynasty from 1861 until her death. She produced a son with Emperor Xianfeng in 1856 who succeeded the throne in 1861 as Emperor Tongzhi, aged 5 years old. Cixi took on the role of co-empress dowager with the Emperor’s widow, Empress Dowager Ci’an.

Emperor Tongzhi, died of smallpox in 1875 at just 18 years old. Tongzhi had not produced any children, and Cixi was able to consolidate her control of the Qing dynasty when she installed her nephew as Emperor Guangxu who went on to have a long reign of 33 years until his death by poisoning in 1908. For much of Guangxu’s reign, it was Cixi who was in control.

During Cixi’s regency China was defeated by a coalition of foreign forces that had invaded to protect foreign interests in China during the Boxer rebellion. The defeat was immensely humiliating for Cixi. Subsequently, Cixi became friendly to foreigners and began to implement fiscal and institutional reforms aimed at turning China into a constitutional monarchy.

The deaths of both Cixi and Emperor Guangxu in 1908 left a child emperor (Xunatong) on the throne ruling over a very restless, and deeply divided Chinese society.

The Decline and Fall of the Qing Dynasty

As the Qing empire continued to grow and the economy began to stagnate, corruption became more widespread. At the same time, the Qing emperors were also dealing with numerous conflicts and rebellions.

During the reign of Emperor Daoguang (1820 -1850), the Qing came into direct conflict with the British during the First Opium War (1839-1842). Opium had been used in China for centuries as a medicine, but during the 18th century, it became popular as a recreational drug. Britain supplied huge amounts of opium to China and an addiction crisis followed. Emperor Daoguang tried to ban opium, but British traders were still able to supply the drug through the black market. China’s seizure and destruction of British opium in China instigated a war that ended in Chinese defeat and the Treaty of Nanjing (1842). This treaty ceded Hong Kong Island to the British and also opened several Chinese ports to foreign trade. In 1856, further tensions between the Qing dynasty and foreign powers led to the outbreak of the Second Opium War (1856-60) which resulted in further treaties which ceded Kowloon to the British, and parts of Outer Manchuria to the Russians.

Amidst a backdrop of rising economic issues, sectarian tension, floods, famine, and frequent foreign interventions and clashes, the Taiping Rebellion broke out in the north in 1850 and lasted all the way to 1864. This rebellion was led by the Christian revolutionary Hong Xiuquan, and became one of the deadliest rebellions of the Qing era, killing more than 20 million people. Although a victory for the Qing leaders, it resulted in increased sectarian tension and further accelerated regionalism, both of which were precursors to the final downfall of the dynasty. There was a further rebellion in the south – the Nian Rebellion – from 1853 to 1868

Despite these serious issues, the Qing dynasty clung to power, with Cixi in charge until 1908. The Boxer Rebellion and the invasion of China by a combined international force, initially to protect foreign citizens and interests led to war and the defeat of the Imperial Army in 1901. Sanctions were imposed on China by the West, further weakening the Qing dynasty and Cixi’s power.

When Cixi died in 1908, the country was in deep trouble and without an effective leader. The emperor at the time, Xuantong, was born in 1906 and hence was no more than a baby. A fierce battle ensued for the control of his regency.

The 1911 Xinhai Revolution brought an end to Imperial China and led to the establishment of the Republic of China. The revolution marked to climax of a tumultuous period characterized by turmoil, revolutions, and uprisings. The revolution brought about the collapse of the Chinese monarchy system which had lasted over 2,000 years. But the early years of the republic were not straightforward; the country splintered apart and was not fully reunited until 1928 under Chinese Nationalist Party rule. A brief, but failed, restoration of the Qing dynasty occurred in 1917, with Xuantong at its head, demonstrating the political chaos that reigned at this time.

The Qing dynasty can be described as a dynasty of two halves. Whilst, not always stable, the first part of the dynasty was successful with a growing territory and population and successful emperor-rulers.

The later part of the dynasty was wracked with turmoil, corruption, unrest, foreign wars, and rebellion which ultimately led to the downfall and overthrow of the imperial system, and the establishment of the Republic of China.