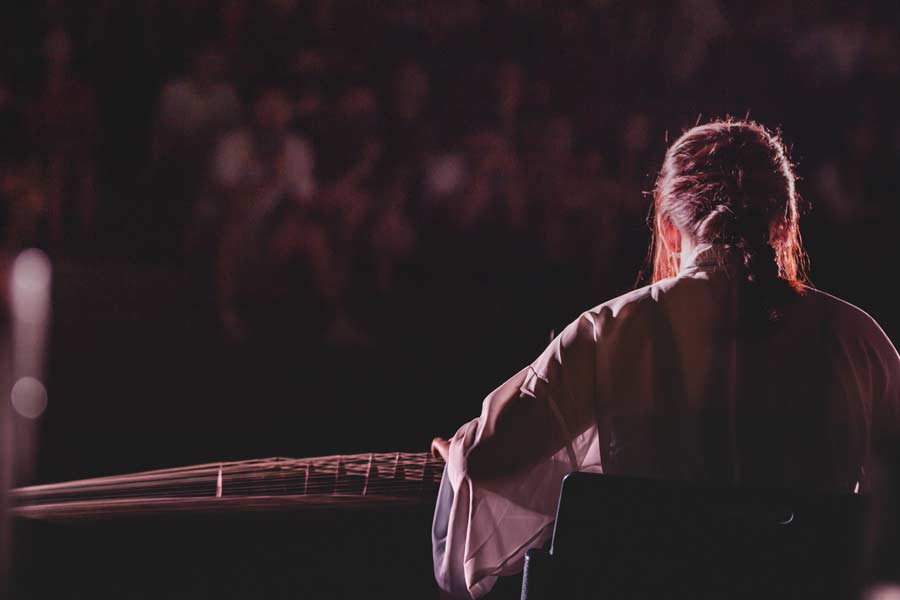 Chinese classical music has its unique aesthetic style. The whole piece of music is more melodious and dreamy, with multi-ethnic musical instruments, and it seems to be back to those antique scenes in ancient times.

The most widespread music piece of erhu in China is the moon reflected on second spring (Erquan Yingyue 二泉映月) composed by the Wuxi folk artist Ah Bing, whose original name was Hua Yanjun. The work has two themes that gradually melt into each other subtly and smoothly. Step by step and variation upon variation, the two themes rise and fall effortlessly. The crescendos especially show the composer’s steely and unyielding spirit in a very hard situation.

The profound range of feeling in this piece of music is incorporated by a tightly knit composition. The result of vigorous variations in the bowing technique and the full use of the five hand positions is a fiercely emotional expression of the composer’s suppressed grief at having tasted the full bitterness of life in the old society. The Moon Reflected on second spring is an exquisite example of a Chinese instrumental folk music piece. The world-famous Japanese conductor Ozawa Seiji was moved to tears when listening to this musical piece and said “The most suitable term for describing this music piece is ‘the sense of heartbreak’. The music is so touching that one should kneel down to listen to it.”

Almost everyone in China can hum a few lines of the violin concerto The Butterfly Lovers (Liang Shanbo and Zhu Yingtai, abbreviated as Liangzhu 梁祝), which can be traced to a Chinese folk legend with the same title.

In South China, there was a village called Zhujiazhuang. In the village, there was a beautiful and clever girl named Zhu Yingtai who assumed a male identity so she could travel to study in Hangzhou, a southeastern city in China, where she met Liang Shanbo, a poor but kind-hearted young man. In the course of their 3 years study, Zhu and Liang became very close friends. When the time came for Zhu to return home, the pair was overcome with much-suppressed sadness. Zhu proposed marriage to Liang for her younger sister and said her sister closely resembled her. She even entreated Liang to visit her home to discuss the issue with her parents. Liang was unaware that Zhu was female nor that she did not have a younger sister. (She was, in fact, offering her own hand in marriage).

A year passed before Liang made his way to Zhu’s residence. He was overjoyed to realize Zhu’s true identity and that she was in love with him. However, happiness turned into sorrow as the two soon discovered that Zhu had been betrothed to another man. Upon his return to Hangzhou, Liang fell ill in his great misery and died. When Zhu heard of this on her wedding day, she fled from the wedding and went to his grave site. There, legend has it that her tears moved the heavens so much that the clouds themselves shed tears over Zhu’s grief. Then, the earth beneath her cracked open, and Zhu jumped into the open grave. Miraculously, the pair was transformed into butterflies. Arising into the sky, they fluttered and danced side by side among the flowers, never to be separated again.

The Butterfly Lovers (Liangzhu 梁祝)was composed in 1959 by He Zhanhao and Chen Gang, who were studying at the Shanghai Conservatory of Music. The pair was exploring the feasibility of setting Chinese music to a western symphonic medium and incorporating borrowed devices from Chinese folk theatrical music as well as vocal techniques of Zhejiang’s Yu Opera. The result was a concerto for the violin in one movement.

The music of Liang Zhu, or The Butterfly Lovers, romantic and touching, is most popular in China. It is also one of the few Chinese pieces that have often appeared on the international stage.

Plum-blossom in Three Movements (梅花三弄) is one of the earliest and most famous pieces of Chinese ancient music. Its origin went back to as early as the Eastern Jin Dynasty, in which period lived a famous general and musician named Huan Yi. Huan was a heroic General and a humble man. He knew music very well and was especially good at playing the flute. One day, he met a young man named Wang Huizhi, who admired Huan very much and invited him to play one piece of the dizi (bamboo flute) music. To the young man’s surprise and delight, Huan accepted the invitation with no hesitation. What he played was Plum-blossom in Three Movements, the most popular melody in that period.

Generally speaking, ‘Three Movements’ means the repetition of the main melody three times, in different musical forms. The slow tempo depicts the pure and noble peacefulness of the plum blossoms, and the rapid tempo represents the way the flowers sway in the wind showing their fearlessness of the severe cold. The whole piece describes the manner of the dauntless plum blossoms that are fighting against the snow and frost. The ancient Chinese scholars’ loftiness and self-admiration of their own purity find expression in the extolling of plum blossoms in this music piece.

With time passing by, Plum-blossom in Three Movements is fairly common with other kinds of musical instruments and this elegant melody is now one of the repertoires of the guqin music.

Ambush on All Sides

Ambush on All Sides (十面埋伏) is a famous ancient pipa score of China, which is always played at international concerts. A foreigner might be familiar with it just as a Chinese with the Blue Danube.

Ambush on All Sides pictured the battlefield of the ancient war in China. Its boldness and majesty have attracted lots of people. How amazing it is to demonstrate such a vivid picture with the pipa merely with four strings! We can hear drum beating and horse roaring which will bring us in the midst of the ancient battle.

What the pipa solo describes is the whole process of the decisive battle of Gaixia, a well-known battle between Chu and Han in 202 BC.

Hundreds Of Birds Worshipping The Phoenix

One of the best-known pieces of suona is Hundreds Of Birds Worshipping The Phoenix (白鸟朝凤), especially popular in Shandong and Anhui provinces in East China and Henan and Hebei provinces in the north. It is also an ensemble of traditional wind instruments. In the music, the orchestra settles down to a fixed accompaniment mode after a spirited introduction. With the background of the accompaniment, the suona section plays a vigorous piping tune in imitation of the chirping of birds in flight. The closeness of the mimicry expresses the people’s love for nature and the careful observation of life by folk artists, as well as their virtuosity in performance. Such beautiful and auspicious tunes help to account for its popularity.

The suona horn is the most widespread and popular folk musical instrument in northwest China. In shape, it is like a trumpet. It is conical with eight holes, seven forward and one at the back. The body part is made of wood. At one end there is a thin brass tube with a reed attachment and flares like a trumpet. Its sound is loud, bright and vigorous, especially good for expressing joy and creating a festive atmosphere.

A Moonlit Night on the Spring River

This is one of the most famous Chinese traditional music pieces. It had been popular among ordinary people before the year 1875 and has become one of the masterpieces in the treasury of Chinese classical music.

Originally named Drums at Dusk or Xunyang Pipa Tune, the music is a solo piece played by the pipa. It got its recent name from Zheng Jinwen, a famous folk musician, in 1930 after undergoing some adaptations. Since 1949, it has undergone many revisions until it becomes a highly polished piece now.

A moonlit night on the spring river (春江花月夜) has been played thousands of times and is loved by millions. With gracefulness and romantic imagination, the music depicts the picturesque scene from a small boat on the river in the moonlight.

The intro has a background of musical harmony, and then a pipa is plucked faster and faster, producing drumbeat-like notes. The whole work is divided into ten sections, each under a different title. The understated melody, the fluid rhythmical meter and the ingenious subtlety of orchestration, combine to show a tranquil scene of a river on a moonlit night in spring, a paean of praise to the beauty of the countryside south of the Yangtze River.

During the Spring and Autumn Period, there was a man called Yu Boya, who was a famous music master with a good command of temperament and superb skills in playing the Guqin.

On the night of a mid-autumn day, the 15th day of the 8th lunar month one year, Boya was sightseeing. The moon was bright and a brisk breeze was blowing gently. With myriads of thoughts welling up in his mind, he went into a nearby pavilion and began to play the Guqin, which he carried wherever he went. The melodious music was so beautiful that it attracted a woodcutter who came and sat down to listen. When Boya played a piece of music eulogizing the high mountains, the woodcutter said, “Wonderful! The melody is as magnificent and dignified as Mount Tai which reaches the sky!” When he played a piece of music depicting the turbulent waves, the woodcutter was very much immersed in the music and exclaimed, “Wonderful! The melody is as vast and mighty as the great rivers!” Boya knew that this man was keenly appreciative of his talents because he understood his music and his moods. They became very good friends and made an appointment – meeting again at the same time the next year. That woodcutter was Zhong Ziqi.

The next year, Boya went to meet Zhong Ziqi. He waited and waited but Zhong did not turn up. Later Boya found out that Zhong had passed away. Boya was so sad that he broke the strings and threw away the Guqin and quit playing forever.

Three Refrains on the Yang Pass Theme (阳关三叠), a piece of music played with the Guqin, is based on a poem written by Wang Wei, a famous poet in the Tang Dynasty.

Wang Wei wrote the poem when he saw off his friend Yuan Er who was to serve in the army at Weicheng, a small town in the Yang Pass at the border. Instrument players made it a see-off song based on Wang’s farewell poem. It has become a masterpiece. Even today, some people would sing this song when they see off friends.