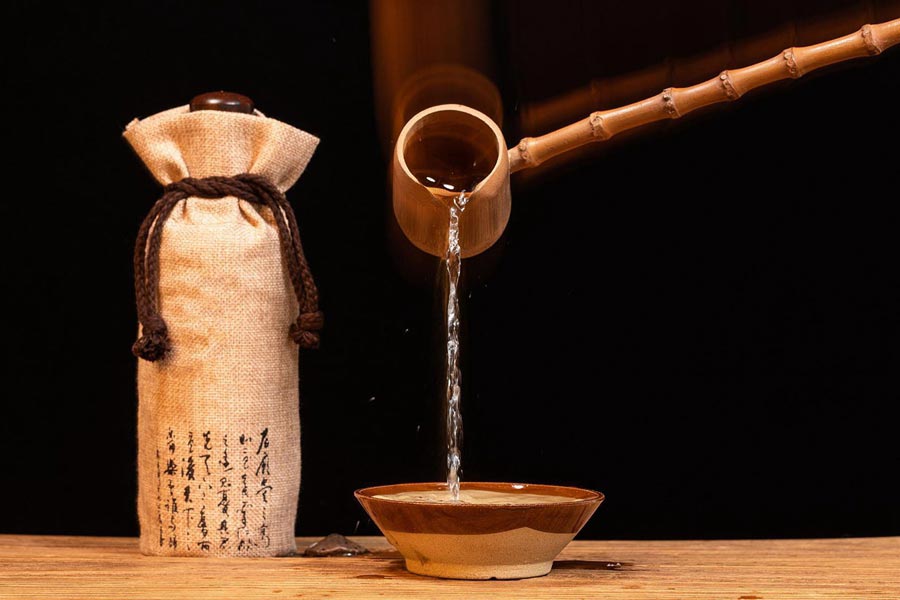 The difference in the origin of wine

It is generally accepted in China that Dukang makes wine. In the west, wine was interpreted as the product of God’s creation: ancient Egyptians believed that Osiris was the inventor of wine, and ancient Greek Thracians believed in Dionysus, the God of wine, who brought wine to the world. Bacchus was the God of wine in the eyes of ancient Romans.

In the Spring and Autumn period(771BC–476BC), from the perspective of the history of science and technology and folklore, it was a time of winemaking and drinking. People not only use “natural fermentation” to make wine but also invent koji to make wine. Liquor making in China has a long history. Koji liquor making is a great creation of our ancestors. Compared with malt and yeast liquor-making in western countries, this unique liquor-making technology is much more complicated. It is a watershed of wine culture between the East and the west, and a brilliant achievement and contribution to the history of liquor making in the world.

The history of western wine originated in 7000-5000 BC. As a sign of western civilization, wine plays a very important role in human history. It can relieve fatigue, relieve pain, disinfect, sterilize, and beautify. Until the late 19th century, wine was an indispensable article in western medicine. Hippocrates, the father of medicine, believed that wine was a kind of moderate wine, moderate drinking will be good for people’s health. Drink less but better is an immortal proverb that wine has always used.

The difference between raw materials for wine

In China, grain is the main raw material for winemaking, while in the west, fruit is the main fermented wine. For this aspect, there is a kind of reasoning that the Yellow River Valley, where people lived in a concentrated way in ancient China, is a temperate continental climate, which is suitable for the growth of grain crops such as sorghum and wheat, so it is also natural to choose grain crops as raw materials for brewing wine. The climate and terrain of Western Europe, especially the Mediterranean climate area along the Mediterranean coast, are very suitable for large-scale grape planting. Over time, people have formed a preference for wine selection. The natural geographical environment and the inheritance of social culture contribute to the different choices of wine between Chinese and western people.

The difference in utensils for wine

China’s wine utensils are complex, mainly bronze and porcelain, such as cups, pots, small handleless wine cups, etc. While western wine utensils are mostly glass products. Transparent goblets are suitable for people to taste when drinking. They not only taste the wine but also observe its color and smell its fragrance. Moreover, each kind of wine has its own cup type. The purpose of high foot utensils is to separate the temperature of the taster’s palm from the bottom of the ball cup, so as not to affect the temperature of the red wine.

It can be seen that the eastern and western countries attach great importance to wine ware. The variety of wine ware is not only due to the development of social productivity, but also due to the needs of the hierarchy, often through different wine ware to represent different identities.

The difference in drinking action and atmosphere

Westerners like to drink red wine. Before drinking red wine, shake it. This is called sobering up. The purpose is to make the red wine fully in contact with the air so that the aroma in the wine can be volatilized to achieve the best taste and fragrance. Westerners seldom persuade people to drink more and show respect for personal will in drinking etiquette.

Chinese people pay great attention to “toast”. When toasting, the upper body should be straight, the legs should be steady, and the glasses should be raised with both hands. When other people drink, they will drink with them. The attitude of the toast should be warm and generous. In the grand banquet, the host will toast at each table in turn, and each table can send a representative to the host’s table to return a toast. Chinese people always show respect for their guests. For example, if you have elderly guests or the guests are from far away, even if you don’t drink, you should pour wine for the elders first to show respect.

The Chinese like to organize wine gatherings. Usually, there would be several people sitting around the table. Westerners like drinking alone. What they enjoy is the loneliness brought about by drinking.

The difference in drinking style

Chinese people advocate drinking only one kind of wine at a time, they think that it is not easy to spread the strength of several kinds of wine when drinking at the same time, and it is easy to get drunk and hurt your body. The western drink is the opposite. Different dishes need different wines. In addition, they will drink aperitif before meals, and cocktails, whiskey, and brandy after meals. Usually, five or six drinks are needed in one meal.

Mr. Bo Yang, a Taiwan scholar, said about the temptation of wine: “due to different national conditions, the drinking culture is also different. Chinese people worship drinking “ drink slowly, sing low”, so it’s called kiss the cup instead of drinking. Enjoy the wine slowly sliding from the tip of the teeth and tongue into the throat, while drinking is just like pouring the win into the stomach. This is a summary of the differences between Chinese and Western drinking styles.

Sober up from drunkenness

People’s imagination is quite different. In China, tea and traditional Chinese medicine are used to relieve alcohol, while in the west, there are cocktails, sauna methods, and more.

For Chinese people, wine has been interacting with life and society. In ancient times, people used wine to express awe when they divined, prayed for rain, or worshiped ghosts and gods. Even when a prisoner is executed, a bowl of wine is provided. When sweeping tombs, people will sprinkle wine in front of and on tombstones to commemorate the dead. Chinese wine culture has a long history, it is one of the “national treasures” of the Chinese nation. Like silk, tea, ceramics, martial arts, and other Chinese elements, it is closely connected with the development of the Chinese nation.

Wine is a symbol of culture and spirit in China. It is also a tool of extensive communication and exchange in the world. It plays an indispensable role in cultural exchange. With the acceleration of globalization, cross-border trade and cross-cultural exchanges are becoming closer and closer, and Chinese wine culture has also got the stage of international communication and entered the international market.