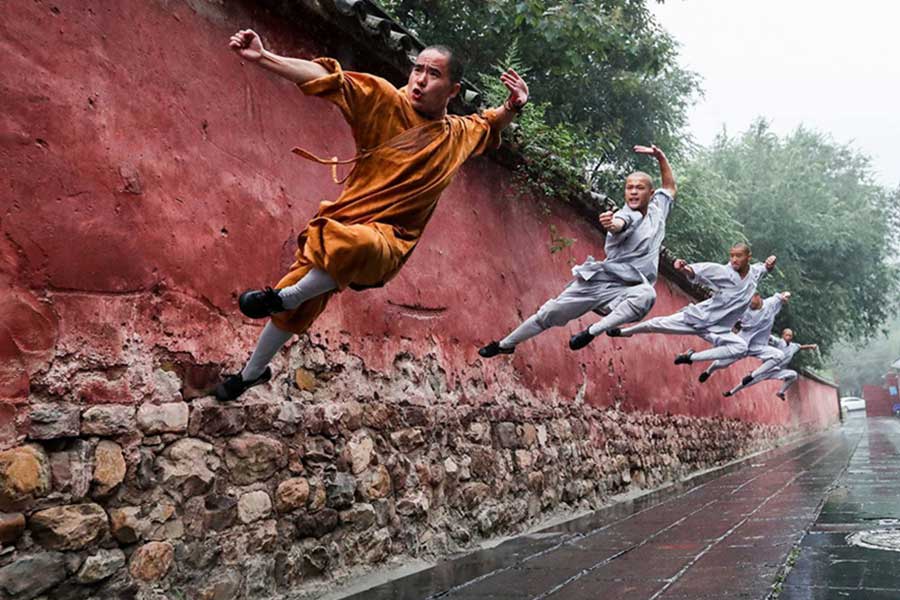 Ancient Chinese martial arts(or Wushu in Chinese) are different from modern ones. The ancient martial arts were developed for military use. Not until after the Spring and Autumn Periods did martial arts begin to incorporate sophisticated aspects of ancient Chinese culture.

The precise origin of martial arts is too remote to identify. When the Qin Dynasty conquered contending states and united China, the ruler ordered all weapons to be put in storage. Discouraged by the Qin government, Chinese martial arts developed very little during this period.

Martial art development picked up during the Han Dynasty, a period noted for its advanced political, economic and cultural development. During the Western and Eastern Jin and Northern and Southern Dynasties, warfare was rampant. Minority ethnic groups such as the Huns, Xianbei, Jie, Di and Qiang from northern China were constantly invading the Central Plains. The battlefield provided a good environment for the development of martial arts.

The Sui and Tang Dynasties were politically stable and economically strong and flourished with foreign trade and cultural exchanges. This period saw modifications in martial arts and improvement in the appearance of demonstrative exercises. The prevailing imperial examination system of the Tang Dynasty was also adapted for the selection of martial arts champions. Soldiers with outstanding martial arts skills were honored with commendations and titles. Martial arts were encouraged and promoted among ordinary people.

By the Song Dynasty, martial arts had become an art separate from military drills. Routine and apparatus exercises developed quickly, and many theoretical works were published. Practitioners studied both fighting skills and theory and introduced the theory of yin and yang into martial arts.

During the Yuan Dynasty, the Mongol ruling class and soldiers practiced martial arts as well as horse riding, and wrestling. Their martial arts skills were performed on stage and were gradually more artfully refined.

During the Ming Dynasty, different martial arts schools flourished. The Qing Dynasty outperformed the previous dynasties in developing martial arts skills. Many exercises that are still famous today, such as Taijiquan(Taichi Boxing) and Baguazhang(Eight-Trigram Palm Exercise), were created during the period.

Literally, wu means military while shu means art, thus Wushu is the art of fighting or martial arts. Wushu is an important and unique component of Chinese cultural heritage with centuries of cultural history attached. Wushu not only includes physical exercise but also Chinese philosophy, and aesthetics.

The consecutive movements should be done in close sequences so as to overcome the movements of the opponent. Any slight neglect in the gestures of hands, legs and body and in the timing will result in favoring the opponent. So, Chinese martial arts emphasize gestures and timing.

To attain the true essence, the Chinese martial arts stress guidance by masters and conscientious practice. The exerciser should practice diligently until he can carry out the movements unhesitatingly and very naturally.

Martial arts were developed under the great influence of ancient Chinese culture and they have benefited a lot from ancient Chinese philosophy. The Spring and Autumn Period was a golden age of academic study and resulted in different schools of philosophical thinking that would lay a solid foundation for the subsequent formation of Chinese culture. Ancient Chinese philosophy advocated the theory of the Dao and held that the Dao was connected with both heaven and the earth and was the source of everything. Martial arts practitioners begin with the irregularity and infinity of Dao and seek to reach a stage in which he or she blends harmoniously with nature. The arts teach practitioners to train the inner spirit and mind as well as the external muscles, bones and skin. Martial arts stress the combination of the physical being with the mental being and emphasize a close relationship between physical exercises and the surrounding environment. Practitioners are advised to use different methods of exercise according to the changes of the natural environment and the conditions of the body. These practices reflect martial arts understanding of the ancient philosophy: let the mind swing freely in Dao and the oneness of man and nature.

Ancient Chinese aesthetics advocated a balance between hardness and softness, voidness and solidness, notion and stillness, and negative and positive, as well as the expression of the spirit of an object through its form. Under this influence, Chinese martial arts have formed their own aesthetic standards that incorporate a stage of conceptual contentment, harmony, and nature, as well as beauty and elegance. For example, Changquan(Long Boxing) features fully extended, elegant and unrestrained movements; Nanquan(South Boxing)demonstrates steadiness and momentum of movements; Shaolin Boxing expresses resolution and strength in its quick and rhythmical movements, and the beautifully and smoothly stringed movements of Taichi Boxing remind viewers of floating clouds and flowing streams.

A distinct aspect of Chinese martial arts is the advocacy of morals and emphasis on benevolence, fidelity and sincerity. Benevolence is the core of Confucianism. It includes love and generosity. As a result, practicing martial arts implies not only building health and strength but also purifying one’s soul. Chinese martial arts work for those who are benevolent, brave, and courageous. The arts stress that the moral level of a practitioner is as important as his or her martial arts skills.

Traditional Chinese schools of martial arts, such as the famed Shaolin monks, often dealt with the study of martial arts not just as a means of self-defense or mental training, but as a system of Wude (martial morality), which is constructed from two Chinese characters, “wu” which means martial and “de” which means morality. Wude deals with two aspects: “morality of deed” and “morality of mind”. The morality of deed concerns social relations; the morality of mind is meant to cultivate the inner harmony between the emotional mind and the wisdom mind. The ultimate goal is reaching no extremity (closely related to the Taoist concept of wuwei), where both wisdom and emotions are in harmony with each other.

Chinese Martial arts are divided into two main categories: the Northern and the Southern. Shaolin leads the Northern category. It combines both external and internal, and “hard” and “soft” exercises.

Boxing is the foundation of martial arts, and Shaolin boxing serves as the basis of other kinds of martial arts. Shaolin Boxing has compactly designed routines. Its movements are quick, powerful and flexible, both practical for defense and attack.

The most outstanding characteristic of Shaolin Boxing is that the practitioner works in one straight line. It means that his movements of advancing, retreating, turning around, sideways, or jumping are restrained on one line. His arms are kept slightly bent so that he can stretch out to attack or withdraw for self-defense freely.

Another characteristic of Shaolin martial arts is to maintain the body in perfect balance, as stable as a mountain. The practitioners should keep a tranquil mind but strike with great force and speed. He should be good at “borrowing” force from the opponent. That is, he should take advantage of the striker’s force and go along with it to bring him to ward off a force of a thousand weights. He should know how to make feigned strikes and when striking, hit the vital parts of the opponent. His movements should be as dexterous as a cat, his shaking as a tiger, his moving as a dragon, his advancing as lightning and his yelling as thunder.

In 1982, a feature film “Shaolin Monastery” was released in mainland China, in Hong Kong, Macao and abroad. Due to its popularity, the number of visitors to Shaolin Monastery to learn martial arts or for sightseeing increases day by day. Martial arts teaching schools have been set up. In 1985, there were more than 40 of them, with students from 20 provinces, municipalities and autonomous regions. In early 1986, the county government combined the schools into five in order to guarantee their quality. In the past several years, many students from these schools have gone on to join professional martial arts teams or sports colleges, and some have become coaches of martial arts teams in other provinces and cities.

Taichi Boxing, named after the term “Taiji” (supreme ultimate from the Book of Changes), was believed to be composed of by King Wen of the Zhou Dynasty. The term means that the universe was an entirety before it was divided into heaven and earth. Taichi Boxing has been sourced from many forms of folk boxing and has been improved on through several generations.

Taichi Boxing is characterized by the unification of mind, breath and motions(body), requiring concentration of mind and calmness of motions. The mind works as a commander and the body a soldier. When in motion, all of the body moves. When at rest, all of the body rests. Calmness is required for motion. Simple force is not preferred. Force is like a wheel and the waist is its axis. The motions are continuous as a circle. The breath is deep and controlled by the diaphragm. Be concentrated, gentle and natural. Be stable as a mountain when not moving, and be flowing as a river when moving. The moves are characterized by roundness, softness, slowness, stability and evenness. They are extended but very well coordinated, and all are an antithetical unity of Yin and Yang. These principles are the same for all schools of Taichi Boxing, though their types are different. There are mainly five types: Chen-Type, Yang-Type, Sun-Type, Wuu-Type, and Wu-Type.

In the past, Martial Arts were developed for the sake of military prowess and physical well-being. Martial Arts were seen as crucial to a soldier’s survival in the time of hand-to-hand combat. Today, the military function has faded and it has been organized and systematized into a formal branch of study in the performance arts by the Chinese. Its physical welfare and athletic functions become dominant. Hence Martial Arts are popular among the whole nation of China, practiced by men and women, young and old alike. Today many people practice Martial Arts to pursue health, defense skills, mental discipline, entertainment and competition.

Martial Arts was last seen at the Olympics in 1936 when a small Chinese team performed during the Berlin Olympics. Martial Arts are known to many people around the world but have yet not become as popular as Japan’s judo and Korea’s taekwondo. To push for Martial Arts to become an Olympic competing item, China has much to learn from Japan and South Korea in promoting martial arts to International Olympic Committee(IOC) members and the world. Japan successfully pushed for judo’s inclusion at the Tokyo Olympics in 1964, while South Korea’s taekwondo made it to the Olympics 12 years after the 1988 Seoul Olympics.