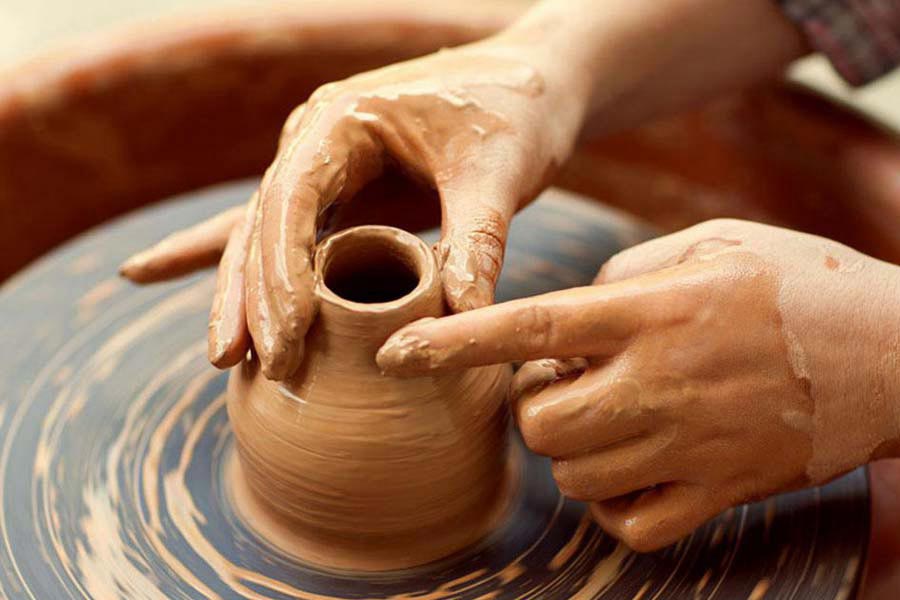 The tea set made of Zisha is recognized as the best tea set in the world. The Zisha teapot is a unique handicraft made by the Han nationality of Chinese, it is also known as the Yixing Zisha teapot.

Because the raw material Zisha (purple clay)is produced in Yixing city, Jiangsu Province. The Zisha teapot is an “antique” with collection value, the works of famous masters are always been hard to find. Do you know how much precious purple clay was found?

The legend of Zisha

There is a beautiful legend, Dingshan (Dingshu town) in Yixing which is located on the Bank of Taihu Lake. It is an ordinary and beautiful town.

It is said that a long time ago, the villagers in the town left early and returned late to do farm work. In their spare time, they used clay to make bowls and pots for daily use. In this way, they lived a carefree and simple life. One day, a strange monk appeared in their town. As he walked, he cried out, “rich Royal clay, rich Royal clay”. The villagers all looked at the strange monk curiously. When the monk found doubt in the eyes of the villagers, he said, “can’t you be rich if it’s not the royal family?”, and people were even more confused and watched him go around. The strange monk raised his voice and walked quickly as if there were no one around. Some experienced elders thought he was strange and followed him to Huanglong Mountain and Qinglong mountain. Suddenly, the monk disappeared. The elder looked around and saw several newly opened caves with various colors of clay. The elder took some colorful clay home, beat it to cast and burn, and magically burned out pottery of different colors. This story is handed down from generation to generation, in this way, the art of Zisha ceramics has gradually formed.

In fact, the Zisha is the unique raw material of Yixing. It has the necessary chemical composition and mineral composition in composition. The main minerals of Purple mud are quartz, clay, mica, and hematite. With reasonable chemical, mineral, and particle composition, purple mud has good technological properties such as good plasticity, high green strength, and small drying shrinkage. The tea-drinking culture in China has a long history, with tea-drinking culture and teapot culture. Among them, the teapot is most loved by tea people. It is not only exquisite in style but also has many advantages when making tea.

Zisha is a porous material with a double-pore structure, fine pores, and high density. Use the teapot to make tea. The aroma of tea is strong and lasting. The Zisha teapot is not glazed inside or outside, maintaining tiny pores, and good air permeability, but impermeable to water, and has strong adsorption, which is unmatched by ordinary teapots. The spout of the Zisha teapot is small and tightly covered, and the inner wall of the pot is rough, which can effectively prevent the fragrance from being prematurely lost. The inner wall of the teapot used for a long time will be covered with a layer of brown-red tea rust. The longer it is used, the more the tea rust will accumulate on the inner wall. It can also improve the late acidity of tea soup, play astringent, and sterilization effect. Therefore, it can delay the mildewing of the tea a little bit, even put the tea in the teapot overnight in the hot summer, the tea will not become rancid. The long-term use of the teapot, even if it does not put tea, only pure boiling water in it, the aroma of tea still exists, which the general tea set can not do.

Zisha pot has a good cold and hot transient performance. In the very cold winter, inject boiling water into the Zisha pot, the Zisha pot will not crack due to the sudden change of temperature. The linear expansion coefficient of the red clay pot is slightly higher than that of the porcelain pot, and there is no glaze, so there is no problem with body glaze stress. After firing, there is very little glass in a red clay pot, which is enough to overcome the sudden change caused by the temperature difference between cold and hot, so it has slow heat transfer. Using the hot water to make tea, then holding the teapot you will not feel hot.

There are many small bubbles inside the pot wall, and the bubbles are filled with nonflowing air, air is a bad conductor of heat, so the Zisha pot has good heat preservation performance. It can also be put on a mild fire to cook and heat up, it will not crack at a high temperature. The longer the teapot is used, the brighter the color of the teapot is and the more elegant the charm is. Zisha pot will become smooth and lovely after a long time of touching and wiping.

The clay that can be used to make Zisha pots is usually buried under the rock layer, and the thickness of the mud layer varies from tens of centimeters to one meter. The Zisha pot is made by firing under the condition of high oxygen and high temperature. Generally, it is contacted by a flat flame, and the firing temperature is between 1100-1200 ℃. The water absorption of the finished product is more than 2%. Yixing is rich in clay, but only a small part of it is the Zisha placer. For a period of time, due to illegal mining and over-mining, many Zisha placer mines have been banned from mining.

In 2005, Yixing issued the “Prohibition of mining” for the Zisha mine, temporarily freezing the mining of Zisha clay. In a certain period of time, it has made scientific and reasonable use of resources, and comprehensively cared for the sustainable development of the Zisha industry, reflecting the needs of the new era.