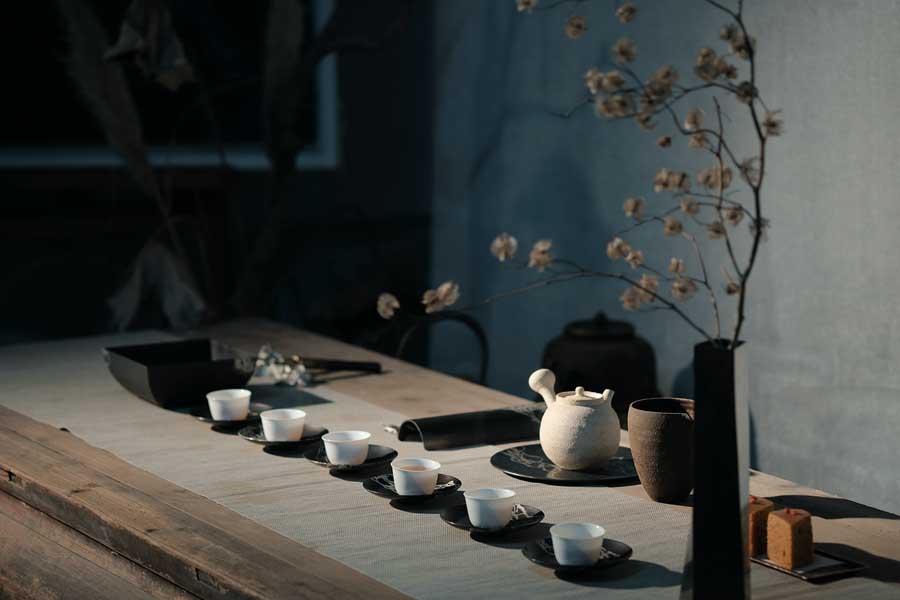 China, the homeland of tea, is the first country to grow, produce and drink tea. Throughout the dynastic history of China, the enthusiasm of the Chinese people for tea drinking has remained unchanged. This is probably due to the fact that tea is a healthy drink. In Guide to Chinese Medical Herbs by Li Shizhen of the Ming dynasty, tea is described as a drink good for our digestive system and the brain. Recent scientific analysis has also verified that tea is a salutary beverage.

Chinese tea culture not only refers to the methods of preparing tea, the equipment used to make tea and the occasions on which tea is consumed, but also includes articles, poems, pictures about tea, the art of making and drinking tea, and some customs about tea.

In this article, We talk about Chinese tea culture in terms of the origin of tea, its history, the methods and customs of drinking tea and tea drinking vessels, the Chinese tea ceremony, legends about tea, and the literature and art closely connected with tea.

The Origin and History of Chinese Tea

When we talk about Chinese tea culture today, we shouldn’t miss an important figure in Chinese history – Lu Yu (733 – 804), who was respected as a “Tea Sage” for his contribution to Chinese tea culture. During the Song Dynasty, Lu Yu wrote the Tea Scripture (also translated as The Classic of Tea).

According to Lu Yu’s Tea Scripture, tea drinking in China can be traced back to the Zhou Dynasty: “Tea was discovered by Shennong and became popular as a drink in the State of Lu because of Zhou Gong.” Shennong (the Divine Farmer) is a legendary ruler, the 2nd of the Three August Ones and the God of Sun. He is supposed to have invented the plough and discovered the curative virtues of plants. The most well-known work attributed to Shennong is The Divine Farmer’s Herb Classic in which Shennong is said to have tasted hundreds of herbs to test their medical value. He was poisoned seventy-two times in a day and saved by tea.

Legend has it that in Shennong Period before 2700 BC, Shennong often went to the remote mountains to pick herbal medicines in order to cure his patients. He carried out an investigation of hundreds of wild plants to see which were poisonous and which were edible, so as to prevent people from eating the poisonous plants. His approach to each plant helped him to experience its unique taste and discern its properties. It is said that one day he was poisoned seventy-two times and was luckily saved by chewing some tea leaves. The green leaves, with a faint scent, were carried to him by a gust of wind. He picked up two leaves and put them in his mouth. Chewing the tender leaves made him feel refreshed and energetic. Out of curiosity, he picked up some more leaves and observed them carefully. He also found nearby the evergreen plant from which the leaves came. He picked some leaves from the plant and brought them home for further study. Later he named the plant “Cha” (tea). Therefore, in early times, tea was used as a magic medicine for all sorts of diseases. The curative plant later became a popular beverage for the Chinese people.

Chinese give great attention to tea and the way they drink it. People have high requirements for the quality of the prepared tea leaves, the water they use to brew tea, and the wares they use to prepare and serve tea.

Generally, the appraisement of tea leaves is based on four principles, namely, the appearance of the infused leaf, the color of the liquid, aroma, and taste. There are many different characteristics to the shape of the leaf. For instance, leaves can be curly or flat, needle-like or flower-like. The appearance of the leaf is important, but the aroma and taste are the more important factors in judging the quality of a kind of tea.

The Chinese emphasize water quality and water taste, so people select their water carefully. Fine water must be sweet, cool, clean, and flowing. Water from good springs is always considered best, as is rainwater from autumn and the rainy seasons. Tap water may have a perceptible odor or taste, which will be imparted to the infused brew, and will compromise the quality of the tea.

Chinese people take great delight in sampling tea. By sampling, one is not only discriminating the quality of the tea but also experiencing the intoxication and enjoying being lost in reverie. One would snatch a little leisure from the busy life, make himself a nice cup of tea at home and imbibe slowly in small sips. One could also secure a serene space outside, for example, a teahouse tucked away in a park or nestled in a hill. Tea drinking will be sure to relieve one’s weary and release one’s worry until one’s spirit soars up and up into a sublime aesthetic realm.

In China, people think different teas look and taste better in certain tea wares than others. For example, green tea should be matched with glass tea ware; scented tea is poured into porcelain ware, and oolong tea is best presented in purple clay tea ware. Chinese prefer pottery wares to wares made of metal or other materials. The best choice is the purple clay wares made in Yixing, Jiangsu province. The purple clay of this region gives the wares their internationally-known purple color.

Yixing has been famous for the production of purple clay teapots since the Northern Song Dynasty. Purple clay ware is made from purple clay or red clay found in the Yixing region. It is delicate and hard in nature, but is also able to have air penetration at the same time. The aroma of the tea can be stored in a purple clay ware teapot, and will then be absorbed by the clay. As the purple clay ware is fairly heat insulated, it is good for tea drinking both in winter and summer. The most attractive thing about this kind of ware is that it looks shiny through time and the often-used pot can release a kind of aroma when it is just filled with hot water without tea. This is the reason why purple clay ware is regarded as an invaluable object by most collectors.

Tea plays an important role in Chinese people’s social and emotional lives. Tea is always made and offered to a guest or friend immediately upon that person’s entering a Chinese home. Serving a cup of tea to the guest is a common practice in China. “To invite the guest to stay longer with a cup of tea” demonstrates hospitality and traditional etiquette. Serving tea is more than a matter of mere politeness; it is a symbol of togetherness, a sharing of something enjoyable and a way of showing respect to visitors.

When the guest arrived, the host would use the best quality tea leaves and tea utensils to prepare the tea. Normally the host would only fill a teacup to seven-tenths of its capacity. It is said that the other three-tenths would be filled with friendship and affection. For the guest, not taking at least a sip might be considered rude in some areas. When the host is accompanying the guest and sees that the guest’s cup is already half empty, he should add more hot water for him immediately.

A Signal of End of Talk

We normally think of tea drinking as an invitation to stay and socialize. Starting from the Qing Dynasty, however, the drinking of tea could signal a close social encounter. This was particularly true when one visited one’s superior. When the guest reached the host’s home, the host would offer his guest a cup of tea. They would then talk. When the host wanted his guest to leave, he would signal this by holding his own cup of tea and drinking it. The guest would then know that the host wanted him to leave and would ask to leave. With the end of the feudal society, this practice is outdated and can only be seen in literary works reflecting the old times.

In Chinese society, the younger generation would show respect to the older generation by offering a cup of tea. In the past, people of lower rank served tea to higher-ranking people. Today, as Chinese society becomes more liberal, sometimes at home parents may pour a cup of tea for their children, or a boss may even pour tea for subordinates at restaurants. The lower ranking person should not expect the higher ranking person to serve him or her tea on formal occasions, however.

A Gesture of Apology

In Chinese culture, people make serious apologies to others by pouring them tea. That is a sign of regret and submission.

China boasts a sophisticated tea culture. Tea ceremony rituals collectively represent the spirit of the “Way of Tea” with four basic principles: thrifty, harmony, respect and beauty. The Chinese tea ceremony emphasizes the tea – what the tea tastes like, smells like, and how one tea tastes compared to the previous tea, or in successive rounds of drinking. The ceremony doesn’t mean that each server will perform the ritual the same way. Each step is meant to be a sensory exploration and appreciation.

The most famous tea ceremony in China is that of gongfu tea. Gongfu tea is a technique for preparing tea. The term “gongfu” denotes any skill that is developed through great practice such as Chinese painting, martial arts or Chinese tea making. It generally refers to the more formal preparation of Chinese tea using tiny cups to match the small unglazed purple clay teapots. The drinking of gongfu tea is an old custom of the Chaoshan area in Guangdong Province where almost every family is equipped with gongfu tea utensils. People there drink several rounds of gongfu tea a day. Even after moving to other places of the country or emigrating to foreign countries, they still maintain this custom.