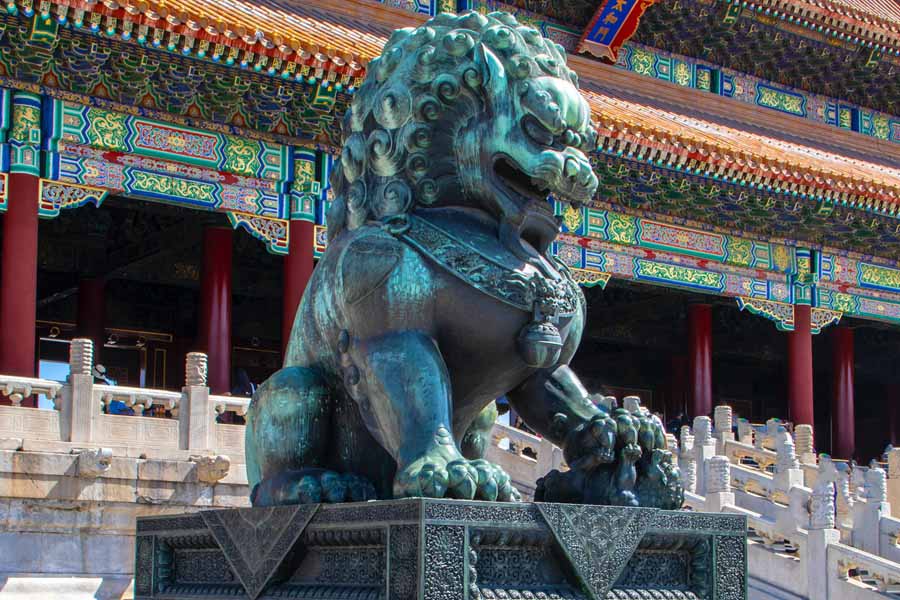 Carving art has a long history in China and it reflects the culture of the Chinese nation. The carving remains and cultural relics kept till now are the precious artistic pearls in the treasure house of Chinese art. There are many types of carving, mainly four types in China, that is, jade carving, wood carving, stone carving, and bamboo carving.

Jade is understood in China as the collective name for most precious stones, and the love of jade ware has been one of the cultural features of China. The Chinese regard carved jade objects as intrinsically valuable, and they metaphorically equated jade with human virtue due to its solidity, durability, and moral beauty. Jade can be divided into many categories such as white jade, yellow jade, agate, turquoise, etc. The jade carved into different shapes is called jade carving which is one of the oldest carving types and constitutes an important part of Chinese arts and crafts.

In China, jade ware underwent a long process of development beginning from the Neolithic Age 10,000 years ago. The earliest jade ware found in China was a piece of serpentine stoneware unearthed at the Immortal Cave in Haicheng, Liaoning Province, dating back more than 12,000 years ago.

The three dynasties of Xia, Shang and Zhou were significant periods in the development of Chinese ancient jade articles. There were few jade articles found from the Xia Dynasty. During the Shang Dynasty, with the development of society, craftsmen used metal tools to make progress in jade ware models and sculpture. During Zhou Dynasty, ancient jade art had achieved a high level and jade carving had become an independent trade.

In the Spring and Autumn Period and the Warring States Period, all the kingdoms paid special attention to the production of jade carving articles; as a result, well-carved, initiative and exquisite works were left and the coherent and undulating patterns of the dragon, phoenix and Pan Chi (蟠螭, a figure of Chinese folklore) on the jade decorations are still treasured today.

In Han Dynasty, Chinese jade carving art experienced its prosperous golden time, putting an end to the development of the ancient jade art of the Shang and Zhou dynasties, and actively exploited new schools succeeding the techniques of the Spring and Autumn Period and the Warring State Period. During this period, jade ware became more practical and objects such as jade tablets became obsolete. At that time, people began to believe in the power of jade ware to increase longevity: they thought they would live forever like gods if they possessed jade ware. Therefore, the practice of burying the dead with jade ware became common. Invaluable jade figures and clothes sewn with golden thread have been found in tombs dating back to the Han Dynasty.

Song Dynasty was a period in which Chinese craft got highly developed, and jade articles also began to develop in a worldly, decorative manner. Jade carving in Yuan Dynasty also gained big achievement.

Furniture carving refers to the carving of wood furniture and it can be called the most widely applied practical art. The furniture decorated with wood art shows its simple and elegant nature of itself. Owing to the difference in customs and aesthetic value, furniture carving varies from one place to another in the pattern of woodwork, design of carving decoration, and carving technique. For example, both rosewood carving furniture in Suzhou, Jiangsu Province and Dongyang wood carving furniture in Zhejiang Province are world-famous, but they differ from each other in the former being elegant and luxurious and the latter being exquisite and unique.

Appreciative display art ware refers to the small and single art ware that is put on the closet, window, desk or shelf for decoration purposes. As a traditional type of wood carving art, it is carved with the solid tondo technique. Modern display art ware has broken the limit on subject and pattern, bringing about a new situation in the development of display art ware.

Stone carving is an ancient activity where pieces of rough natural stone are shaped by the controlled removal of stone. Owing to the permanence of the material, evidence can be found that even the earliest societies indulged in some stone carving activities.

Beginning in New Stone Age, Chinese stone carving art developed rapidly and became more and more mature during Shang and Zhou Dynasties. The stone chimed with tiger engraving unearthed at Anyang, Henan Province in 1950 displaying the beautiful sculpt, skillful cutting technique, and graceful and natural lines of stone carving. From Qin Dynasty to Tang Dynasty, stone carving art reached its peak, with many good stone carvings produced showing the simple, rough characteristics of Qing and Han stone carvings as well as the delicate and perfect characteristics of stone carving art in the Tang Dynasty. The strong and lively Qin tombs with their pottery warriors and horses, exquisite Bodhisattva statue, tall and splendid Six Stone Steeds at the Zhaoling Mausoleum of the Tang Dynasty, etc. are all world-famous and are regarded as the pearl in the treasure-house of human history.

Stone carving is mainly used for the base and tablet inscription of arches and civilian residences. It has a wide variety of ways to set up its modeling and composition. It can be divided into two types in terms of its characteristics: one is decorative, being fully developed, compact, well-organized, and finely divided; the other is artistic, being simple, concise, and equally densified.

The carving methods are perfect. Some carvings, overdone in carving either too deep or too shallow, are so interesting and impressive that till now under hundreds of years of wind and rain they still look attractive and are admired by people, especially those carving with three to four levels of architrave or railing board. The exquisite carvings are highly graded and combine different carving methods and techniques to extend the limited space, creating greater literary and artistic heights.

The manifestation of stone carving art is always limited by the nature and practicality of the material, which determines the carving strategy. Not only is stone carving art limited by the nature of the material but also it is limited by the function of construction components. Besides, it has high requirements for adaptability of composition, modeling, and carving methods. The carving technique must meet the art form and content which is the principle of stone carving art. Differences existing in content and aesthetic value during each period propel the development of the stone carving technique from single and shallow to complex and changeable and then to single and shallow again. The latter is not just the repetition of the former; it actually develops from original simple and naive form of art to a complicated and neat form of art.

China, the hometown of bamboo, boasts the richest resource of bamboo forest in the world, hence its title as the “kingdom of bamboo” and it is also one of the first nations to use bamboo. Since ancient times, bamboo has been widely used in the daily life of the Chinese people, and it has great influence on the development of Chinese history and culture.

Bamboo formed the earliest ties with Chinese characters, which can be traced back to 6,000 years ago. The pictographic symbol of “bamboo” was found on the potteries unearthed in the Yangshao cultural relics of Banpo Village, Xi’an in 1954, and the symbol was also discovered in oracle bone inscriptions and inscriptions on ancient bronze objects. During the period from the Warring States Period to the Jin Dynasty, people carved characters on bamboo slips to keep records. Later, books made of bamboo slips were created to convey cultural information. Many of the earliest Chinese historical documents, such as The Book of History, The Book of Rites and Analects of Confucius, were recorded on such material, making great contributions to the development of Chinese culture. After the papermaking technique was invented by Cai Lun, bamboo slips were replaced by paper gradually.

Bamboo carving, also called bamboo engraving, has a long history in China. Archeologists once unearthed a painted dragon-pattern bamboo spoon from the Western Han Dynasty at the No.1 Han tomb of Changsha Mawangdui in Hunan Province which shows that as early as 2,000 years ago people carved bamboo into elaborate utensils.

Bamboo slips can be regarded as the earliest form of bamboo carving. Although bamboo slips were replaced with the development of papermaking technology, bamboo carving was still loved by people and is still today. Very few bamboo carvings pre-dated the Ming Dynasty, but mid-Ming-Dynasty bamboo carvings have become a professional industrial art, and more and more artists have taken it up, shifting its role from practical use into an art form.

Bamboo carving has two classifications based on the technique it adopts: bamboo board carving and three-dimensional round bamboo carving. The former can be further divided into positive and negative, each containing deep and surface carving. Negative carving includes line, deep and sunken round deep carving, while positive carving includes thin ground mass with positive relief, low relief carving, carved in high relief and openwork. Incense tubes, bamboo brush pots, armrests, and fan ribs belong to this category. The latter is three-dimensional carving in the round, or called bamboo root carving, which carves bamboo into different shapes like birds or animals.

Chinese carving is a precious artistic heritage in Chinese industrial arts and it benefits enormously from the four types of carving, that is, jade carving, stone carving, wood carving and bamboo carving. With the importing of other elements from other countries, Chinese carving is sure to have a bright future.