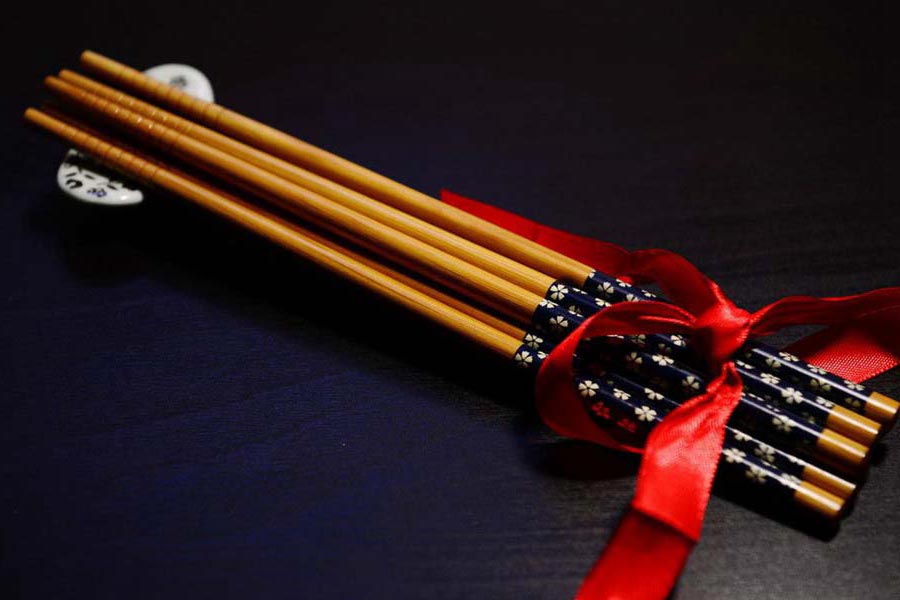 It is said that there are generally three ways for people of picking up food to eat: 40% of people grasp or tear food with their bare hands, 30% use knife and fork, and 30% make use of chopsticks. It is the Chinese who first used chopsticks thousands of years ago.

So chopsticks can be said to be a great invention by the Chinese. They are regarded as the extension of fingers, which are not afraid of extreme heat and coldness. But exactly when the Chinese began to use chopsticks, as an eating instrument is anybody’s guess. It is said that people began using chopsticks during the Shang Dynasty. They were first mentioned in Liji (The Book of Rites), a work compiled nearly 2,000 years ago. Likewise, they were initially in the form of twigs, which the primitive Chinese possibly used to pick up a roast after they began to use fire. The twigs evolved into the wooden, tapering sticks, as we know them today. It is generally held that chopsticks began to be called kuaizi (筷子) during the Ming Dynasty. But in the documents of the Ming and the Qing dynasties, kuaizi was seldom used, instead, zhu (箸)was often used to refer to chopsticks, especially in literary works.

Chopsticks are initially used in China, but the first museum in the world of chopsticks is established in Germany, where are exhibited, from various countries and regions and periods in history, more than 10,000 pairs of chopsticks that are made of gold, silver, jade, animal bones, etc.

Contents hide
1 Types of Chopsticks
2 How to Use Chopsticks?
3 Taboos You Must Know About Using Chopsticks

Zheng Chuanyin and Zhang Jian made a succinct summary of the invention and development of chopsticks in the Dictionary of Chinese Folk Customs, “Chopsticks, a food picking utensil made of bamboo or wood, is widely used by the Hans and some minority ethnic groups. In remote ages, they were made of branches, bamboo or natural animal bones. Later they were made of scraped bamboo or wood. Ivory and jade chopsticks appeared during the Xia and Shang dynasties; bronze and iron chopsticks emerged during the Spring and Autumn periods. Lacquer chopsticks did not appear until the Han Dynasty. Later silver and gold chopsticks were made. Among all kinds of chopsticks, the ones made with rhinoceros horns, jade, or ebony inlaid with gold were the rarest.”

There are several styles of chopsticks that vary with respect to materials, length, embellishments, etc. When it comes to materials, there are so many choices, such as bamboo, plastic, wood, bone, metal, jade, porcelain, ivory, and so on. In ancient China, the commonly used chopsticks were made of bamboo, wood, and bone. These materials were easy to be found and made. The royal family and other upper-middle-class could use chopsticks made of jade, ivory, and other precious materials. With the development of technology, there are more and more convenient and cheap materials that can be made into chopsticks, for example, plastic and metal.

In fact, this design is good for people to embellish chopsticks. The square column can be carved with many patterns or characters. It is an advantage that the cylindrical ones do not get. These embellishments are related to Chinese elegant tastes. You can find various ancient goods with all kinds of carvings, which proves the exquisite craftsmanship. For this reason, their quality and elegance were remarkable. They are highly collectible. There are lots of museums with valuable and meaningful chopsticks in China.

How to Use Chopsticks?

Whatever their shapes or their material, chopsticks should go in pairs, and the pair must be identical to each other. The correct way to use chopsticks is to hold the pair in the hollow between the thumb and forefinger of your fork hand. The one closest to your body should rest on the first joint of the ring finger and stay relatively immobile. Hold the other one with the forefinger and middle finger, which manipulate it like pinchers to pick up the food. The strength applied by the fingers should vary with the things to be taken hold of. The skill to pick up, with speed and dexterity, small things like beans and peanuts and slippery things like slices of preserved eggs can only come from practice and coordinated action of the fingers.

Incidentally, using chopsticks has a great deal in common with wielding a brush to write Chinese characters. Those who write with a good hand, some scholars have observed, are invariably those who handle the chopsticks correctly. One holds the writing brush in the same way as one would the moving chopsticks and, while writing, one must achieve coordination in the movement of the shoulder, arm, wrist and fingers in order to write well. Westerners are very much fascinated by the skills the Chinese display with chopsticks and it is said that there are training centers established specially to teach people how to handle chopsticks.

Westerners are often impressed with the cleverness of the Chinese hand that makes embroideries and clay sculptures with such consummate skill. Couldn’t this skill be attributed to the constant use of chopsticks?

Taboos You Must Know About Using Chopsticks

In China’s food culture, chopsticks play a very important role. But do you know that there are some etiquette and taboos for using chopsticks? Here are some key points.

1. Don’t insert chopsticks into the rice

One of the most important taboos is that chopsticks should not be put into a bowl of rice vertically because it resembles the ritual of incense burning that symbolizes “feeding” the dead and death in general. Generally, when a child acts like that, he or she will get a scolding.

Tapping chopsticks on the edge of bowls is an impolite action. Chinese people think the action is similar to beggars’ actions that aim to attract others’ attention. Because in the past, only beggars will make this sort of noise to beg for a living.

3. Make sure what you want to eat

It is well-known that in China, many dishes are communal, and everyone picks up what they like with their chopsticks. But it does not mean that you can dig and search through food for something in particular, which is sometimes known as “digging one’s grave” or “grave-digging” and is extremely poor form. It is poor etiquette to pick up food that you do not like and put it back. You’d better make sure what you want and pick it up in your bowl.

4. Don’t point at someone with chopsticks

Whether you are full or still eating, you should not point at someone with chopsticks. Some people would like to invite others to dine or talk with others and point chopsticks toward others, which is considered poor etiquette. It means to blame others.

5. Don’t move your chopsticks before the host

If you are invited to a feast, you cannot take up your chopsticks before the superiors or the elders. It is a common custom that shows your respect to the host. What’s more, whether you hold your chopsticks or not, the chopsticks should be placed neatly. Traditionally, chopsticks with uneven lengths on the table mean death and bad luck.

6. Pass food to the elderly first before you eat

It is a sign of respecting them. Generally speaking, family members or closely related people will transfer a choice piece of food from a dish to each other s bowl, which is a sign of caring. However, you ought to keep in your mind that you’d better use serving chopsticks which are also called public chopsticks to transfer food to others.

If you drop your chopsticks by accident, you should pick them up quickly and make an apology to the others. Because the Chinese think their ancestors have everlasting rest underground, and they should not be disturbed.

This action implies a sign of negation to others. Sometimes this point will be always ignored. If you are full or you just take a break from eating, you can place chopsticks neatly on the side of your bowl. Pay attention to it, please. Don’t put your chopsticks at the top of the bowl. Since it will get your chopsticks off the ground easily.