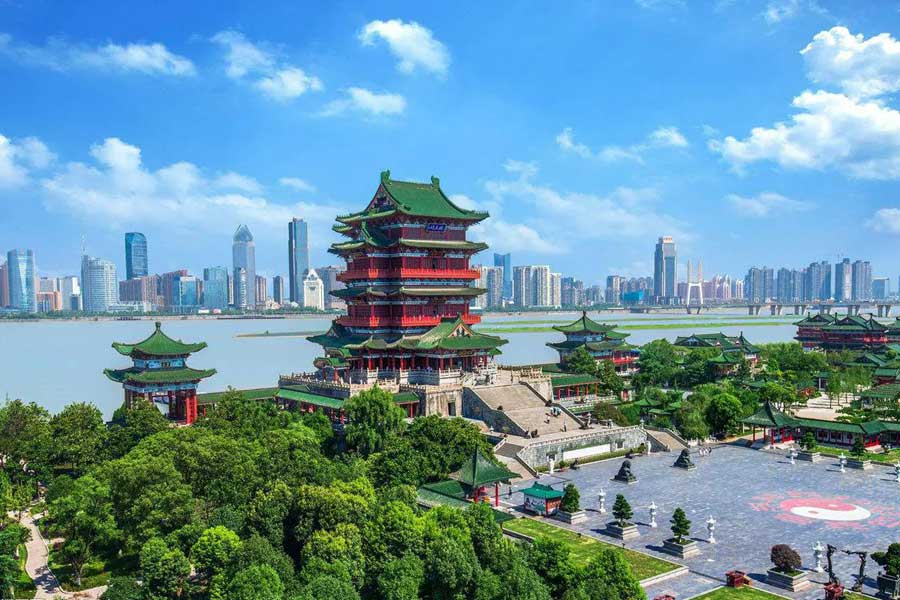 The Yueyang Tower, standing on the west gate of the Yueyang city wall, looking down at the Dongting Lake, facing Junshan Island in the distance, and linking the Yangtze River to the north and the Xiangjiang River to the south, is listed as one of the Three Great Towers in the south of Yangtze River, along with the Yellow Crane Tower in Wuhan, and the Tengwang Pavilion in Nanchang. It has long enjoyed the reputation of being the “first tower under heaven”， as the Dongting Lake is known as the “first water under heaven”.

It is said that Yueyang Tower was originally built for soldiers to rest on and watch out for. In the Three Kingdoms Period, Lu Su, General of Wu State, trained his soldiers here and then rebuilt it as a tower for troop inspection.

In the fourth year (716 AD) of Kaiyuan of the Tang Dynasty, General Zhangshuo was dispatched to defend Yuezhou and he rebuilt it into a tower named South Tower, and then Yueyang Tower. After that, many famous poets such as Du Fu, Han Yu, Liu Yuxi, Bai Juyi and Li Shangyin went there and leave many famous poems that made Yueyang Tower well known and a famous tower around China.

In the fourth year (1044 AD) of Qingli of the Song Dynasty, Teng Zijing was stationed at Baling Jun, the ancient name of Yueyang city. In the second year, he renovated the Yueyang Tower and invited his good friend Fan Zhongyan, a well-known writer, to compose an essay. In Fan’s essay, Remarks of Yueyang Tower, he not only described the wonderful scenery, but also wrote the famous lines of one should be the first to bear hardship and the last to enjoy comforts, indicating his concern for the country and people. His words were applauded and won the Tower greater fame, and have been deeply rooted in the Chinese people’s minds from generation to generation. After numerous renovations, the current structure was rebuilt in 1867 in the Qing Dynasty.

The Yueyang Tower has special architectural features. Its main building has three stories and is 15 meters in height, with four huge Nanmu pillars supporting the whole building, twelve round log columns supporting the second floor, and another twelve catalpa pillars supporting the roof. Constructed of wood with interlocking brackets that require no nails, the main building is as steady as a monolith. Its roof looks like a general’s helmet, grand and unique, which together with the pure wooden construction reflects the unique style and great achievement of ancient Chinese architecture.

Bordering on the Yangtze River and crouching on the top of Snake Hill, the Yellow Crane Tower enjoys the fame of “the First Scenery under Heaven” and is listed as one of the three most famous towers on the south bank of the Yangtze River. Its cultural significance led to its being made the symbol of Wuhan City.

Up to now, the Tower has a history of over 1,700 years. According to records, it was originally built in 223 during the Three Kingdoms Period by Sun Quan as a watchtower for his army due to the ideal location. As such a famous tower, it is normal that many legends are created as to why it was built. One of the most popular legends goes that the Tower used to be a wine shop opened by Mrs.Xin. One day, a Taoist monk, in order to thank the woman for her favor of free wine, drew a magic crane on the wall and ordered it to dance on hearing claps. Since then, thousands of people came to see the spectacle and the wine shop was always full of guests. 10 years later, when the Taoist monk revisited the wine shop, he played the flute and then rode on the crane to the sky. In order to memorize the supernatural encounter and the monk, Mrs.Xin built a tower here named Yellow Crane Tower.

The above is of course myths and legends. To build a tower in such a place during wartime was obviously for military purposes. The military function of the Tower, however, had gradually been forgotten and when in Tang Dynasty, it was enjoyed mainly as a picturesque location for celebrities and poets to get together, treat and meet friends, enjoy the beautiful scenery and make merry and compose poetry. Many great poets in the past dynasties such as Cui Hao, Li Bai, Bai Juyi, Jia Dao, Lu You visited the Tower and wrote hundreds of poems and scores of writings in praise of the magnificent Tower. It was estimated that up to the Tongzhi Reign of the Qing Dynasty, as many as 300 poems about the Tower had been found in the historical literature, in which “Yellow Crane Tower” written by Cui Hao, a famous poet of the Tang Dynasty made the Tower well known throughout China. It was these poems that made the Tower so renowned and induced people to visit. Later, the story about the great poem Li Bai’s giving up composing poems after reading “Yellow Crane Tower” by Cui Hao brought the Tower greater fame.

Originally built at a place called Yellow Crane Rock projecting over the water on Snake Hill over 1,700 years ago, the Tower was destroyed many times in successive dynasties, and was rebuilt time and again until 1884 when it was for the last time reduced to ashes. The present tower is the result of four years of construction beginning in 1981. The Tower, 51.4 meters high, five-storied with yellow glazed tiles and red pillars, overlapping ridges and interlocking eaves, is reconstructed on the basis of the one designed during the Tongzhi Reign of the Qing Dynasty, but more magnificent than the old one. Modern construction technology was applied to the construction of the Tower and it was built under the framework of reinforced concrete and with an imitation wood surface. The ground floor of the new is 30 meters wide on each side and the top floor is 18 meters wide on each side. The appearance of the Tower is the same regardless of the direction it is viewed from.

The Tower has different architectural features from different dynasties, but all magnificent and individualized. Compared with Yueyang Tower and Tengwang Tower, the horizontal design of the Yellow Crane Tower is four-faced and octangular which, according to ancient architectural culture, has complex symbolic and ethical meanings. Seen vertically, each floor with yellow upturned eaves seems to have been designed to resemble a yellow crane spreading its wings to fly, making the Tower vigorous but exquisite, varied and beautiful.

The Tengwang Pavilion, located on the east bank of the Ganjiang River, northwest of Nanchang City, Jiangxi Province, is one of the three most notable pavilions south of the Yangtze River together with Yellow Crane Tower and Yueyang Pavilion. It also has the reputation of being “the First Pavilion of Xijiang River” due to its excellent location, height, overall size, and architectural style.

The reputation of Tengwang Pavilion, to a great extent, is due to a well-known prose – Preface to Tengwang Pavilion by Wang Bo. It is said that when the author, a reputable poet of the Tang, passed Nanchang on his way to Guangdong, he wrote this prose on the subject of the banquet which was being held to celebrate the reconstruction of the Pavilion. With the spread of this prose, Tengwang Pavilion became proverbial.

The Pavilion was built in 653 AD, when Tengwang Li Yuanying, a younger brother of Emperor Taizong of the Tang Dynasty, was the military governor of Nanchang. The Pavilion was named after him but it had undergone reconstruction as many as 28 times as a consequence of events during its 1,300-year-long history. In 1926, the Pavilion was destroyed by fire during the conflicts between the Northern Warlords, and as a result, the building was burned to ashes and only the bluestone plaque “Tengwang Pavilion” remained. The current building, based on the style of architecture in the Song Dynasty, is the result of rebuilding that was carried out between 1983 and 1989.

The existing pavilion is even more spectacular and magnificent than its predecessors. The main building is 57.5 meters in height and occupies a construction area of 13,000 square meters with a 12-meter-long base symbolic of ancient city walls.

Penglai Pavilion, seated on the cliff of Danya Mountain close to the sea in the north of Penglai City, is a famous coastal tourist site in eastern China’s Shandong Province. It is listed as one of the four famous towers in China together with Yellow Crane Tower, Yueyang Tower, and Tengwang Pavilion. Having long been known as a fairyland and a famous place for watching mirages, Penglai Pavilion is regarded as the place where immortals inhabited, and thus it was frequently visited for wonder herbs by emperors since Qin and Han dynasties.

Built-in 1061 by Governor Zhu Chuyue in the sixth year of Emperor Jiayou of the Northern Song Dynasty, the Pavilion was intended for people to enjoy the sea view. In the 17th year of Wanli of the Ming Dynasty, official Li Dai added more buildings around, which together with the Pavilion was called the Pavilion complex. In the 24th year of Emperor Jiaqing of the Qing Dynasty, the Pavilion expanded again on the basis of the existing buildings sponsored by local government secretary Yang Fengchang and garrison commander Liu Qinghe to the present complex occupying a construction area of 18,960 square meters. After 1949, the government appropriated funds many times for its renovation. In 1965, the Pavilion resumed its original look, reflecting the traditional architectural characteristics of ancient China.